The Iran-Venezuela farce: where are the autos? 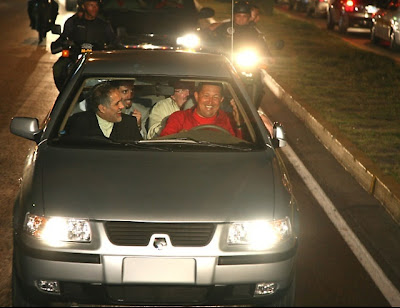 In November 2006 Hugo Chavez drove through the streets of Maracay, a Venezuelan city, the first auto assembled by the new company VENIRAUTO, owned jointly by Chavez (49 percent) and Ahmadinejad (51 percent). When he drobe through a bystander cried: “the guy next to him looks just like Sadam Hussein!”.
That day Chavez said: “This is the best indication we are getting to be an industrial power. This is the start of a new era”. One of the Chavez paid media outlets proudly announced that the company would be producing thousands of cars by 2008. http://www.aporrea.org/endogeno/n74287.html
Three years later no one knows what happened to the $70 million that Chavez put into that project. Travelers though the Caracas-Valencia highway can see today how dozens of these vehicles are rotting away in the lots of the factory.
No one is buying them, no one is doing any effort to sell them. The Iranian company AIDCO and the Venezuelan company VENINSA really do not give a damn. It was never meant to become a real business but just a propaganda ploy. VENINSA, the venezuelan company was formed to manufacture cars, computers and many other industrial products. So far, it has produced nothing.
Today VENIRAUTO is a ghost company, says a report which appeared in http://www.noticierodigital.com/ . The company has disappeared completely.