Venezuelan health priorities are upside down 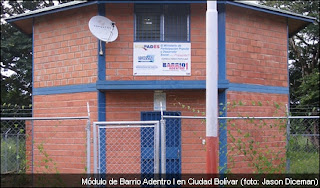 A Barrio Adentro I module, many already abandoned

In most societies the issue of health brings to mind, in order of priorities:  (1), the health of the nation; (2), existing health policies and indices, and, (3), the health of one of its members.


In Venezuela this logical ranking of priorities is upside down. Preoccupation number one is the health of one person, Hugo Chavez. A distant number two has to do with health policies while number three, the health of the nation, is almost a non-issue, smothered under government cynical promises and handouts.


As a result the national debate is completely distorted. This must be considered a strategic triumph for Hugo Chavez. During the last years he has put Venezuelans to dance to his tunes. He controls national debate and everyone in the country hangs on his very word in order to react. Although the nature of public debate in strongly presidential countries has always had this bias, Hugo Chavez has been able to bring it to the extreme.


For the last two years the attention of the Venezuelan public has been almost entirely focused on Chavez’s health. This has become a soap opera in the best of Latin American traditions. The country has witnessed Chavez’s tearful speeches pleading for a “few more years of life ”, a catholic extreme unction taking place, several instances of voodoo sorcery, many trips to Havana with a full entourage at the rate of some $300,000 per day, two reported surgeries and moments of euphoria in which he declares himself  “totally free of cancer”. This has been an emotional roller coaster which has already lasted two full years. It is a tribute to the political skills of Hugo Chavez and his Cuban advisers that the subject has been on page one for such a long time. Today, we still do not know what the truth is about Chavez’s health, a topic that would not really be very important if it was not due to the fact that he is, again, running for president.


This is an abominable crime
No matter whether Chavez really has cancer or that he has been lying to us all the time, he has committed and keeps committing an abominable crime. If he is truly ill he is being totally irresponsible, trying to become president for five more years, knowing that he will not be able to discharge his duties in the manner he should and that he could die at any moment. But if he has been deceiving the nation all along and his illnes is just a political stratagem he would be even more of a criminal. There is no worse crime than deceiving the country you pretend to lead. He should be severely punished for that.


2.      Health policies and indices in Venezuela


During the last 14 years Venezuelan health policies have been mostly focused on day to day primary medical attention to the poor in their neighborhoods, through a program called “Misión Barrio Adentro”. In this program small dispensaries mostly manned by Cuban medical or para-medical staff  have been installed in barrios all over the country in order to receive Venezuelans with health complaints


A recent report on Barrio Adentro, May 2012 (http://www.aceprensa.com/articles/el-sistema-de-salud-venezolano-en-fase-terminal/ ) by ACEPRENSA, describes the salient characteristics and evaluates the results of this program. It says that it consists of three stages: Barrio Adentro I is the entry stage, in the barrios, focused on primary attention and health promotion. Barrio Adentro II offers specialized services in pediatrics, gynecology, ambulatory surgery, X-rays and emergencies. Barrio Adentro III offers attention in “People’s Hospitals”, university hospitals and the Oncological National Center. However, the only functioning stage is the first one. I add that the hospitals, in particular, have been sorely neglected and patients have to bring their own medicines, bed sheets and food in order to receive attention.  The report adds that The Lancet published an evaluation of Barrio Adentro I in 2008 and reported that around one third of the modules were closed down due to lack of doctors. The report said that some 4000 Cuban doctors had been transferred to other countries, in particular Bolivia. Barrio Adentro II is less than 50 percent installed while only one new hospital has been built  under Chavez, the Latin American Cardiological Children’s Hospital. The Lancet report adds information that can be easily verified by all Venezuelans: primary attention in the barrios has absorbed most of the resources for the health program and truly structural health policies regarding medical attention in hospitals are absent. A patient in need of surgerycan wait for months for the procedure, only to find that, at the last moment, there is no available anesthesia. 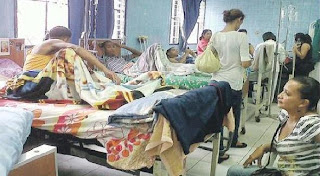 In parallel many diseases that had been under control for many years have reappeared in the country: malaria, yellow fever, tuberculosis, Chagas disease, leprosy and dengue.


The report adds that opposition leader Miguel Angel Rodriguez has recently denounced that 70 percent of Barrio Adentro I and II modules have been abandoned and that Barrio Adentro program  had led to the destruction of the Venezuelan hospital and ambulatory health center networks.  About 2000-3000 Cuban doctors have fled Venezuela to other countries, mostly via Colombia. 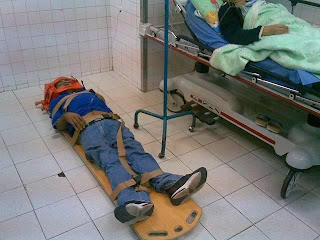 What could have been a good initiative, if combined with an effective structural, long-term approach to health policies, has turned into a significant disaster for Venezuelan health efforts.


Venezuelan society is gravely ill. The symptoms of its illness include a pathological indifference for its own history, loss of memory and the existence of two split personalities that are in constant struggle against each other. In an individual these characteristics would probably lead to a diagnosis of Dissociative Identity Disorder. In a society they lead to anomy and progressive disintegration.  The Chavez years have created two Venezuela’s, strongly opposed to each other: one, made up of the poor Venezuelans who have been convinced by Chavez that they have been victimized by the rich; the other, the Venezuelan middle class, the well to do and many of the poor who are the victims of this inflammatory, Manichean Chavez’s rhetoric.


It is no exaggeration to say that Venezuela is a country highly deteriorated both materially and spiritually. Material deterioration will be easier to repair than the tragic damage done to the Venezuelan soul. The cordial, friendly Venezuelans that we knew for many years have given way to citizens who are aggressive, hostile, bitter, resented and afraid of each other. Obviously this deep wound on the Venezuelan soul will take a long time and the influence of true leadership to heal.
As in the case of many other Venezuelan issues such as food production, industrial activity, education and petroleum industry management, the priorities for health are upside down. It is only logical that what has been called a Revolution by its promoters has really been a tragic involution.

Although Venezuela is a low comparison to North America or other English o European countries. You can ask anybody how things were 50 years ago, with how they are now. And the complaint is, that things have "involved" also ! Some advancements to be just, but a slow decadence of mind !