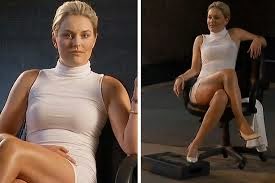 Rafael Correa paid Sharon Stone $275,000 to attack Chevron and she collected but did not show up. Correa is suing her/ Rafael Correa le pagó $275.000 a Sharon Stone para atacar a Chevron y ella cobró pero no fue a la reunión. Correa la está demandando.
Rafael Correa is just another gangster, just like Nicolas Maduro, Raul Castro, Evo Morales or Daniel Ortega. He uses Ecuatorian money to further his personal agendas and personal vendettas. One is against Chevron, the company that fought succesfully his attempt, in cahoots with U.S.  lawyer Steven Donziger, to extract billions of dollars from the company through a fraudulent trial. After the fraud was uncovered Correa has continued spending millions trying to get even with Chevron. This contract with Sharon Stone, an aging film star with beautiful legs (the legs are the last to go), was not honored by the star and, now, Correa, is trying to get his money back.
Here is the report:
A public relations firm representing the government of Ecuador sued Sharon Stone in federal court on Tuesday alleging that the actress absconded with a large speaking fee for work promoting that government’s long-running legal and political battle against oil giant Chevron. The complaint, filed by New York-based MCSquared PR, alleges that Stone and the American Talent Bureau, a speaking agency that represented her, accepted $275,000 to attend an anti-Chevron event in Ecuador last year but failed to appear as promised. The lawsuit reveals additional details about MCSquared’s pricey work for the Ecuadorian government. It inked a $6.4 million contract with the government in 2013 to attack Chevron in furtherance of the government’s attempts to collect a multi-billion dollar Ecuadorian judgment against the company.
In Spanish there is a saying: “Ladrón que roba a otro ladrón, tiene cien años de perdón”. A thief who steals from another thief can be pardoned for 100 years.