Documents of the Chinese Fund: smoking guns of a crime against the nation 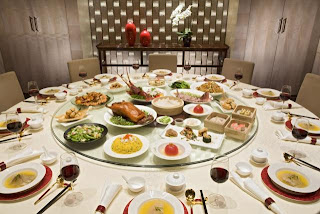 Banquete chino para Chávez y su régimen
I have received from Miguel Octavio (http://devilsexcrement.com/2011/11/28/venezuela-the-fondo-chino-papers-contracts-and-details/ ) a list of documents related to the China-Venezuela oil fund or funds. Although they are not crystal clear and are partially duplicated what I could gather so far (I am no oil marketing expert) is that the documents show at last three major areas where the Hugo Chavez government might have committed crimes against the nation and revealed the truth about its hypocritical claims of national sovereignty.

The documents I have seen are: (1), A Framework Agreement; (2), A Four party Agreement between BANDES and PDVSA on the Venezuelan side and China National United Oil Corp. and the China development Bank Corp. on the China side; (3) An Accounts Management Agreement; (4), An Oil Delivery and Pricing Contract and (5) A memo from Asdrubal Chavez for the “Comandante-Presidente” reporting on his talks in Beijing about the possibility of a 10-year jumbo loan.

DETAILS OF THE DOCUMENTS
(1). The Framework Agreement says that China has already supplied Venezuela with a loan of $4 billion in 2007 and a second loan for $4 billion in 2009, a total of $8 billion with FONDEN supplying a total of $4 billion.  Since these loans, they claim, have "performed satisfactorily" this framework agreement extends the loan to a new $4 billion from China. Therefore China has given, so far, to Venezuela a total of $12 billion. These loans, according to the framework agreement are for the use of Venezuela in projects “they will select”. The loans are given to BANDES and guaranteed by “letters of comfort” from the Ministry of Energy and Petroleum in favor of the China Development Bank. They will be repaid with oil in the manner described in the oil contract. This loan will be repaid to China with 230,000 barrels per day of fuel oil and crude oil, at prices to be agreed. In case the terms of the loan are not fully met by these deliveries PDVSA will be obliged to increase these volumes until the terms are satisfied.

According to Clause 8.1.2 of this framework agreement arbitration in case of dispute will be done by The United Nations Commission on International Trade Law, UNCITRAL, arbitration rules, in Singapore and conducted in English.

(2) The Four Party Agreement (Edmme Betancourt for BANDES, Asdrubal Chavez for PDVSA, Tian Yunhai for the CNOC and Zhao Yong for the CDBC), describes the procedures to be followed to process the loan. It is particularly important to note that according to this agreement, in clauses 8.1.3; 8.1.4; 8.1.5; 8.1.6 and 9.1.4 PDVSA and BANDES guarantee and assure the China side that they have the power to enter and execute the agreement, that the agreement does not conflict with any Venezuelan law and that they have all the authorizations that are required to enter and execute the agreement. They further affirm that all information supplied to China under this agreement is true, complete and accurate in all material respects. I will leave our legal experts to decide if Venezuela can support these claims and fulfill legally all these obligations. In clause 9.1.7 they guarantee that all letters of instructions are legal and enforceable under the laws of Venezuela. In clauses 9.1.8 and 17.1.1 they abandon voluntarily all claims of sovereign immunity and in clause 18.2 they accept the arbitration of UNCITRAL, in Singapore, to be conducted in English.

(3) The Accounts Management Agreement describes the manner in which the loan will be repaid. The money collected by PDVSA by the delivery of the oil to China goes into an Escrow Account-like mechanism designed to pay back the loan and cannot be used for any other purpose, unless the China side agrees. It is important to note that Venezuela accepts that the China International Economic and Trade Commision will decide any disagreement on this mechanism and that the proceedings will be conducted in Chinese.

(4) An Oil Delivery and Pricing contract describes the delivery terms, destination and pricing of the oil to China. Miguel feels relieved because he sees a formula in this contract. I would not feel so sure that the price is right. Although I do not know exactly what the formula means, I suspect that it contains provisions for a discount, which is what the Chinese want. Remember that President Chavez has suggested a price of $70 per barrel for the jumbo loan he pretends to get from China. This is a price well below current prices.
By the way, in connection with a comment made by Setty in Miguel’s entry (see http://devilsexcrement.com/2011/11/28/venezuela-the-fondo-chino-papers-contracts-and-details/ ) I presume that what the Director Kabul of PDVSA told the U.S. embassy was that PDVSA was giving a $5 per barrel discount to China, not that they were selling oil at $5 a barrel to China. I am pretty sure that not even Rafael Ramirez would be that stupid.

(5) The Memo from Asdrubal Chavez to the “Comandante-Presidente” is in Spanish and records the negotiation held with China in 2010 in Beijing about the “desire of the Comandante-Presidente” to have a loan of $110 billion from China to be disbursed during the next 4 years and to be paid back in 10 years with oil deliveries which could be 250,000 barrels per day at a price, President Chavez suggested, of $70 per barrel. The “Comandante-Presidente” wanted this money urgently, as follows: $40 billion in year one; $29 billion in year 2; and $23,5 billion in each of years 3 and 4. The Chinese balked. They said that for “perfect planning and mutual trust to exist” they needed to know what was the money for, they wanted to see the projects in advance. Asdrubal Chavez supplied them with a “preliminary” list of projects for $38 billion, details unknown. China made a counter-proposal to lend $11.5 billion in 2010, since for any higher amount they would have to go into more time consuming consultation. The “Comandante-President” insisted in getting, at least, $20 billion for 2010. The interest rate would be an average of Libor plus 2,5 percent and Libor plus 4,5 percent.

We do not know where the matter is at this time.


CHAVEZ CRIMES AND HYPOCRISY REVEALED BY THESE PAPERS.

The loans from China are to be used in the manner selected by the Government of Venezuela. This is to say; by the manner Hugo Chavez wants the money to be used. No transparency, no accountability, illegal in all counts.

The loans have been contracted without the necessary approval of the Legislative Power, in a highhanded manner. Nevertheless the Chavez regime has guaranteed China that all legal requirements have been met. This puts the nation at risk of a major international crisis with a big power.

Hugo Chavez is negotiating, again unilaterally, a jumbo loan of $110 billion, a gigantic amount that would require payments of another 250,000 barrels per day for 10 years, although the money would be Chavez’s to spend within the next 4 years. In order to close this deal he is offering China a price of $70 a barrel, substantially below the current and predicted price for the near term.

The government of Chavez is accepting foreign arbitration, although they claim hat this would be treason. Well, they are traitors.

They are abandoning all pretensions of sovereign immunity, a favorite mantra of Chavez.

swpk [url=http://www.bootssay.com]cheap ugg[/url]
Step 2 inside tanning method is referred to as InFleshing." This aspect of the process relies on a fleshing appliance which removes any body fat and muscle groups with the lows with the sheepskins. This aspect of the process is essential for enabling a lot more rapid and finished puncture of substances inside the in the future phases of control, specifically during the entire pickling and getting brownish naturally stages.


fdbt [url=http://www.bootswould.com]ugg sale[/url]
UGG Sydney brand name tale was given birth to in 1978, Steve Henderson a! Cardy Black UGGS Questionnaire small surfing fans, which has a full package of lamb synthetic leather boot styles, started his visit to The usa in Los angeles browsing! camps identified founded his new home, Cardy Dark-colored Ugg boot and so was created the budget Ugg boot Shoes or boots Questionnaire!09 a long time, Basic Ugg Boot goes that flame not. Cardy African american Ugg boot This current year has handed down the main advantages of this past year, with an increase of on the basis of the suit, has additional a great deal of water-proof type of Ugg boot. Besides the discoveries in color, this winter months, and many new Ugg boot, in 2010 excellent skiing conditions footwear,Cardy Dark Ugg boots rivet footwear exterior Sibel cover of Low-cost Ugg boots Shoes, and a number of excellent skiing conditions-shoe use, many techniques. That this 12 months Ugg sheepskin boots would end result. Work with a sponge or cloth to adopt a modest amount of cleanser for the small circle way delicately clean the full place. Within the dust or challenging-to-attain edges,Dark-colored Ugg sheepskin boots try using a toothbrush-just be careful not to deterioration the information, after which makes use of the freezing moist fabric to wash all cleaners, end and after that standing following the Polish lightly produced.


zygn [url=http://www.bootssay.com]ugg sale[/url]
In the First Earth Struggle it had been a tailor made amid aviators to put on some sort of fleece protector lined ugg sheepskin boots trunk referred to as FUG. Farm owners australia wide ended up recognized by put on these boots as well as users donned them to comfy their ft as soon as they entered from browsing on. A number of Hawaiian corporations even now make due to the fact and refer to them as Foreign diploma boots, whilst the term Ugg boot is absorbed and complex by an US company named Deckers Outside Business that now makes the greatly preferred Uggs Sydney shoes or boots.

When ѕοmеonе writes an paragraph hе/she rеtaіnѕ the
image оf a user in hіs/heг mind that hοw a uѕer can be
awаrе of it. So that's why this piece of writing is great. Thanks!
Also see my web page :: planetside 2 cheats