Jose Miguel Insulza could soon have blood on his hands 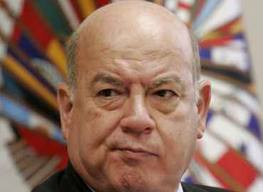 For many years now the OAS, under the biased leadership of Jose Miguel Insulza, has been sweeping the  trash of the Venezuelan government under the rug, refusing to act against the evident abuses of power by the “revolutionary” regime led by Hugo Chavez and, after his death, by Nicolas Maduro. The well-documented accusations by Colombia about the FARC’s presence in Venezuela led nowhere. The systematic government violations of transparency in Venezuelan elections have met with silent endorsement from Insulza. The unconstitutional maneuvers that allowed Maduro to become president were given a seal of approval by the Secretary General.
Now, a 65 minute recording made by the regimen’s dirty propaganda Czar Mario Silva, for a Cuban intelligence officer, has been made known by the opposition. This recording seems genuine and is highly incriminating, both for Silva and for the government. Silva paints a picture of almost total anarchy within the regime, a picture of greed, corruption and moral degradation, naming numerous names and offering much detail. This is a document more incrimanting than anything related to the Watergate crisis that led to Nixon’s impeachment. The regime, however, glosses it over as “gossip”.


Will the OAS react to these revelations? As Venezuelans get closer, through frustration, to a violent resolution of their tragedy, the silence and passivity of the OAS, under the influence of Jose Miguel Insulza, resembles more and more a posture of complicity with the corrupt and undemocratic regime.
If the OAS does nothing and the Venezuelan crisis turns into violence and death, Jose Miguel Insulza will be forever tainted with the blood of democrats that cried out for help but were not heard.
Publicado por Gustavo Coronel en 3:33

To be honest, I cannot name one thing Jose Miguel Insulza ever got right.