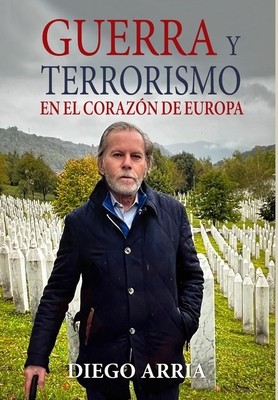 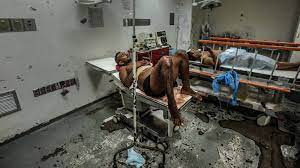 GUNS IN CRIMINAL HANDS: THE UGLY FACE OF THE AMERICAN DREAM 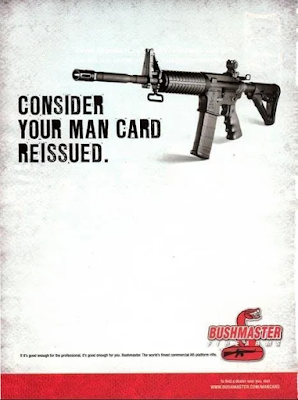 This ad says that possesing this gun will make you a man..... I disagree

As a Venezuelan born senior citizen, close to my 89th birthday and naturalized U.S. citizen since 2011, I am grateful every day for all the happiness and stability that this wonderful country has brought to my life. I have lived in the U.S., off and on, for about 34 years, first as a geology student in Tulsa, Oklahoma; as a member of Harvard’s fellows program; as an employee of the Interamerican Development Bank in Washington and of an oil company in the Gulf of Mexico, finally, as an immigrant in 2003 to this date. Most, if not all, of my years in the U.S. have been truly idyllic. I can say I have fulfilled my American dream, living modestly, quietly, secure and surrounded by friends, in a beautiful corner of Virginia.

As a naturalized citizen I have always been conscious of my limitations to understand fully all the complex social situations taking place in the country, lacking the benefit of being native born and the historical legacy that would allow me to participate with confidence in the discussion of the great national issues.

Legally, of course, I have a right to do so but I still feel hesitant, believing that I cannot see the issues as clearly as the U.S. born and raised could. As a result, my blog has thousands of entries dealing with every conceivable topic but very few have been dedicated to U.S. national issues, other than those in the energy field plus a few on general politics.

But I think is time for me to exercise my right to an opinion on a national issue of the gravest importance, such as gun violence and what can and should be done about it.

Gun violence is a horrible U.S. reality and it has progressed under the umbrella of the U.S. constitution, specifically its second amendment:

“A well-regulated Militia, being necessary to the security of a free State, the right of the people to keep and bear Arms, shall not be infringed”.

This constitutional amendment “protects an individual right to possess a firearm unconnected with service in a militia, and to use that arm for traditionally lawful purposes, such as self-defense within the home.”

This amendment was passed in 1791, 246 years ago. The social environment of the country is quite different today. There are sophisticated systems of civic protection run by the governments of the states as well as by the federal government. Families are no longer living in the frontier without defense other than their own rifle. And yet, about 42% of all American homes have at least one gun, a percentage that has remained steady for the last 50 years. One in every three guns in the world is in the hands of an American. Obviously, the second amendment has become deeply entrenched in the minds of millions as a civic right and has become part of a “religious” set of beliefs that have made the U.S. different to any other civilized society.

The massive ownership of guns and the low level of gun control existing in the country have made the United States the developed country where deaths by fire arms are, by far, the worst: see https://worldpopulationreview.com/country-rankings/gun-deaths-by-country, 2019.

There are U.S. 23 states where there is no need to carry a license to bear arms. Congress has been remarkably lax in considering stricter controls of gun ownership. As a result anyone who is not an obvious mental case can buy a gun like the one used by the 18-year old in Texas, who killed 17 children and two adults before being shot down himself.

The U.S. has surpassed 200 mass shootings this year

Last year there were 693 mass shootings in the U.S.

This year The Gun Violence Archive, an independent data collection organization, has counted 212 mass shootings that have occurred. It defines a mass shooting as an incident in which four or more people were shot or killed, excluding the shooter, see: https://www.npr.org/2022/05/24/1101050970/2022-school-shootings-so-far

Gun violence is almost certainly the cruelest and the most unexpected social disease in what is, in many other ways, one of the most civilized societies in the world.

AND NO POLITICAL WILL EXISTS TO SOLVE IT

In congress most attempts at increasing gun control have failed due to lack of political will among its members.  Just a few days ago, Senator Ted Cruz said, when asked about increasing background checks to buy guns: “background checks chip away at gun rights and, ultimately, will take away guns…. You see Democrats and a lot of folks in the media whose immediate solution is to try to restrict the constitutional rights of law-abiding citizens”, see: https://twitter.com/i/status/1529222385236611072

The so-called gun lobby, made up of arms manufacturers and distributors, is very powerful and has distributed significant amounts of money to congressmen to recruit them to their side.

TABLE: Top 20 recipients of funds from gun rights interests among members of Congress, 1989-2020

The National Rifle Association is the symbol of the U.S. gun-driven culture. We all remember the photo of the great Charlton Heston with a rifle in his hands, shouting that they will only take the gun away from “His cold dead hands”, in a pose so different from the Moses or the Ben Hur we associate him with. 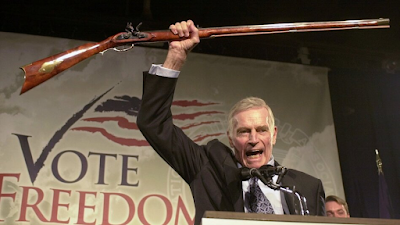 The NRA will hold its national convention next week in Houston, not far from where the latest gun generated carnage took place, the town of Uvalde. In a dramatic move the company that builds the firearm used by the 18 year-old to kill the children and adults, Daniel Defense, has abruptly withdrawn from participating in the meeting, fearing they could become the target of severe retaliation. One of the main speakers announced is former president Donald Trump, one of the most influential political supporters of the organization.

This horrible social cancer that is eroding the national soul of the United States has no cure in sight because it has become part of a collection of ideological fetishes, a macabre political voodoo that represents a perverted /inverted version of American exceptionalism.