FROM MUNICH TO CARACAS: ROADS TO HELL PAVED WITH GOOD INTENTIONS 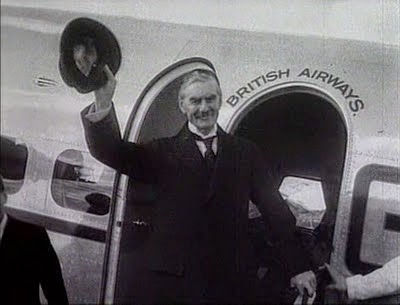 In 1937 the general mood of European democracies became one of appeasement. Britain and France had refused to get involved in the Spanish civil war and, in fact, France had placed an arms embargo on the Republican government to avoid antagonizing Germany.  In November 1937 Hitler had met with his military commanders and explained to them his plan for the invasion and colonization of Eastern Europe and of the Soviet Union, his version of a Plan de la Patria, already outlined in the Mein Kampf.
By 1938, says Henry Kissinger in his book: “Diplomacy”, page 310, Hitler felt strong enough to destroy he national boundaries established at Versailles, starting with Austria. This move, says Kissinger, had “about it the sense of ambiguity” that was essential to Hitler’s early challenges. Why not Austria, where sympathy for Nazi Germany was strong?  Putin’s recent annexation of Crimea has had the same sense of ambiguity.
Then Hitler turned to Czechoslovakia, in spite of the country’s military alliances with France and the Soviet Union. Trying to placate Germany Great Britain asked for a meeting with Hitler and sent Neville Chamberlain, already 69 years old, on a five hour flight, his first flight ever, to a remote location, Berchtesgaden, where Hitler spoke with him for seven hours. In this first meeting Chamberlain reluctantly consented to the dismembering of Czechoslovakia, a position also taken by  French Prime Minister Daladier  in a second meeting and, finally, at Munich, in a summit between Germany, Italy, Great Britain and France. Kissinger mentions that the Czech representatives were in the anteroom but were not called into the conversations while their fate was being discussed.
The Munich dialogue and results were met with global approval. President Roosevelt sent Chamberlain his congratulations. The Prime Minister of Canada thanked him for his service to mankind. The Australian prime Minister was grateful for his efforts to “preserve the peace”.  Chamberlain returned to England claiming “to having brought peace for our time”.
Kissinger comments that Chamberlain’s reputation and credibility collapsed after it became evident that this would not happen. He says that Chamberlain had only been doing what he felt were the prevailing wishes of the majorities. These majorities, however, would turn against him once it became apparent that he had not brought peace to his times,  Kissinger, page 316.
It would take the abusive incorporation of non-German populations into Nazi Germany to exhaust English patience. At this point England no longer acted with political pragmatism but with a sense of moral outrage, based on Wilsonian principles rather than in realpolitik. World War II followed.

MUD's Ramon Jose Medina
After 15 years of an abusive regime led by Hugo Chavez and Nicolas Maduro, with the tutorial guidance of Castro’s Cuba, the economy of the country had been run into the ground. Politically the regime had violated about every article of the long and prescriptive constitution they had imposed on Venezuelans. And this had taken place without a major civic upheaval. All attempts by the opposition to dislodge the regime through electoral means had failed, due to the total control of the electoral system exercised by the government. However elections kept taking place without the opposition represented by the Mesa de Unidad Democratica, MUD, ever demanding a cleanup of the electoral registry or the naming of impartial Directors of the Electoral Council. After the particularly murky presidential election of April 2013 the MUD took a stronger stance and did not recognize the new president, Nicolas Maduro. Daladier and Chamberlain had also taken a strong stance against Hitler’s ambitions during the early stages of their meetings with Hitler. Both stances, in Munich and Caracas, were short-lived. In the case of the MUD the strong posture evaporated in a matter of months and was transformed in a desire for dialogue. This produced a rupture of the common front of the opposition to the regime, since a group felt that enough was enough and that a strategy of confrontation, rather than dialogue/negotiation with the regime was required. This group took to the streets in a mood reminiscent of the words of William Jennings Bryan: "We have petitioned and our petitions have been scorned. We have entreated and our entreaties have been disregarded. We have begged and they have mocked when our calamity came. We beg no longer. We entreat no more. We petition no more. We defy them.”
As in Munich, many observers of the Venezuelan situation felt dialogue was the correct route. The Pope asked for it. So did the U.S. Secretary of State, John Kerry and many Latin American political leaders. The MUD, echoing Chamberlain, must have felt that they were interpreting correctly the desires of the people for peaceful co-existence and for attempting to change the policies of the regime, not changing the regime.
In their wish to adhere to this course of peaceful action the MUD made concessions to the regime that many have felt unacceptable. The prisoners are still in prison, the children are being indoctrinated,  food and medicines are scarce, the oil industry is in ruins, corruption dominates bureaucracy and, worst of all, Human Rights of Venezuelans are openly violated before the eyes of the world. But the MUD kept seating with the regime, although, in the last few hours, is finally giving signs of losing its infinite patience.
England finally lost its patience, unfortunately too late to avoid World War II.
MORALS OF THIS PARALLELISM
Santayana : “Those who cannot remember the past are condemned to repeat it”.
Luis Herrera : “You sang too late, little bird”.
Venezuelan popular saying : “Pick up the glass fragments”, probably a variation on Humpty Dumpty.

They believed that donkey dick is a cornet.

Amazing after all the damage that Marxist ideology has wrought in the world and how visible its miserable failures and destruction are, that people still cling to it blindly as the salvation of mankind. Anyone who sees Cuba as a model to follow is indeed a deluded fool.