PEMEX AND THE MEXICAN NATIONAL INTEREST. 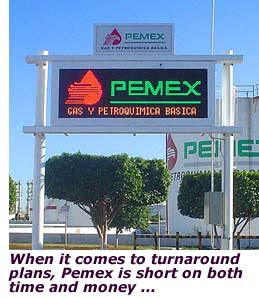 How can Mexican oil be produced in the optimum manner, so that it can give Mexicans full benefit? The answer to this question should be technical and economic, don’t you think? However, when I accessed Internet looking for information on this topic I found only articles about its political aspects. In Mexico today, as it has happened since the 1930’s when Lazaro Cardenas nationalized the oil industry, oil has been a matter of nationalistic pride, a symbol of Mexican “independence”. Oil is sacred, almost a religion to Mexicans. The question that matters most to Mexicans is not how to produce the oil optimally but how to keep it under total national control.
But what does national control mean? Once nationalized the Mexican oil industry fell in control of the workers. This was not in the best national interest but in the interest of a minority. The first board of eleven members included five members of the labor union. After only two years PEMEX was experiencing declining production, lack of discipline and wholesale thefts (Grayson: “The politics of Mexican oil, 1980). When the Director general called on the workers to change their attitude they requested his dismissal. From the start PEMEX had social objectives, it was not profit oriented. Labor felt that PEMEX should not be a commercial enterprise but a social organization.
By 1958 PEMEX was practically bankrupt. About 70% of its budget was financed with short-term loans. In the 1960’s PEMEX had almost 100,000 employees and the technical staff was obliged to join the labor union. Historically PEMEX has had the following characteristics:
1. Is a symbol of economic independence and of Mexican technical proficiency,
2. The Director general is usually very close to the president of the country,
3. The Board is controlled by the government and the labor union,
4. Financing is mostly based on short-term loans,
5. There are many more employees than required,
6. Jobs were actually sold by the labor union until recently,
7. The union receives or received a percentage of all contracts signed with the private sector and require union approval,
8. Vacancies are or were filled out by relatives of the employee retiring,
9. Prices of the hydrocarbons are regulated in the domestic market,
10. PEMEX has been used to borrow money for the government.
FACING A NEW, VERY ACUTE CRISIS
This has been the manner in which PEMEX has been managed for decades. Today PEMEX is facing another acute crisis: Production is down, from some 3.4 million barrels per day to about 2.8 million barrels per day. The main producing areas are declining. The country is importing increasing volumes of refined products, quite a blow to Mexican nationalism. PEMEX's reliability as an oil exporter is in doubt.
Faced with this crisis the current government has proposed to open some areas of the Mexican oil industry to private investment. PEMEX requires financial and technical help that cannot generate on its own, in order to increase production and allow Mexico to be, once again, self-sufficient. This would not mean giving up control of the company, the government argues.
The Mexican opposition to the government, led by defeated presidential candidate Lopez Obrador, has reacted strongly against this proposal. How to manage the Mexican oil industry has become, once more, a fierce ideological battleground between those who want PEMEX to remain totally free from foreign participation and those who feel that, without foreign participation, PEMEX will no longer be able to do a proper job for Mexico.
This clash is not rational but emotional, almost religious. I have mentioned before the example of the monkey who grasps a kernel inside the nut but cannot take it out. The monkey dies of hunger with the kernel firmly grasped because he will not let go. Is this not the case of PEMEX? The company requires the money to drill for new production but national pride or simple political demagoguery will not allow this possibility.
The case of PEMEX is not the only tragic case of state-owned companies that are on the brink of financial and technical disaster. PDVSA, PetroEcuador, Yacimientos Petroliferos Fiscales Bolivianos are some other examples of companies where dogma has replaced sound, professional management. In contrast, PETROBRAS, Brazil and ECOPETROL, Colombia, are good examples of companies that have overcome cultural and ideological inferiority complexes that keep companies like PEMEX from reaching its potential.
Are the Mexicans more patriotic than the Brazilians or the Colombians? Or, simply, less rational?
Publicado por Gustavo Coronel en 4:34

Thanks for this great article. I think the USA ought to pay more attention to the happenings in Mexico. The national news spends much time on reporting about the illegals but very little about the atmosphere in Mexico which causes the illegals to come.

The illegal situation is sorta like a pipeline running from Mexico to the USA. There is a leak on the American side and the Americans are spending all their time trying to clean up the spill but no one thinks about going to Mexico and turning off the valve.

America should be spending its time helping Mexico create opportunities for her people rather than building fences.

Americans should be reading Mexican history and the Mexicans should read American history. Recently I heard a radio talk show personality who propose the USA should take over Mexico's oil because so many illegals were coming. Somehow according to him that would bring down gasoline prices at the pump. He did not know Mexican history or maybe he was saying something outrageous to get ratings.

I recently read "Opening Mexico" by Julia Preston and Samuel Dillon. It gave me some insights about how Mexico operates and gave me some history I did not know. I recommend it.

As always, there are few commentators who understand the issues related to state-owned oil companies in Latin America as well as you do Gustavo.  And what is particularly important for Americans to understand here, as john indicated in his comment above, is that Mexico's future prospects for development are closely entertwined with reform of its energy policies.  The questions that must be answered relate not only to PEMEX and its operations, as you presented so well, but also to a Mexican federal government budget that dedicates billions of dollars a year to subsidizing the price of gasoline at the pump for Mexican citizens.  Calderon's Reforma Energética does not merely address economic, social, and bureaucratic restructuring; it actually goes all the way to fiscal reform.  This is a very serious problem requiring a profound effort on the part of Mexico to chart a hopeful course for its future.

If I may be permitted to post a few links for readers who may find these facts interesting:

1.  The Latin Business Chronicle estimates that Mexico spends $20 Billion (U.S.) annually in subsidy expenses to keep the price of gasoline at the pump affordable for average Mexican citizens.  This includes paying for the importation of 41% of the gasoline consumed in the country.  Those declining production figures quoted in this blog article look even more important in light of these statistics.

2.  To follow up on part of what you mention in your article, readers may want to know that some of the "technical help" Mexico needs deals with ultra-deepwater offshore drilling opportunities in the Gulf of Mexico, some of which have already begun under PEMEX's direction, but the full exploitation of which are out of reach without some level of privatization.

And the article at the second link also makes clear that a U.S.-Mexican treaty meant to regulate the distribution of oil discoveries in the Gulf of Mexico between the two countries is set to expire in 2010, which implies that reforming Mexico's domestic oil industry must be a pretext for its extension and/or renegotiation.

3.  Not many people have heard the news, which I am sure a Petroleum Geologist like yourself knows Gustavo, that recent oil discoveries in what has been popularly described as the "Lower Tertiary" formations of the Gulf of Mexico have enormous potential for growing American domestic petroleum reserves.  These finds are far offshore, they exist in ultra-deep water (up to 7,000 ft. in depth) and require deep formation drilling of depths reaching at least 20,000 ft. below the ocean floor.  Drilling these wells pushes American drilling technology to its limits, and we are the best in the world.  It is far beyond the reach of Mexico, and it is quite likely they have huge untapped reserves waiting to be exploited as well.

And against all of this Lopez Obrador and his demagogic allies continue to shout: "¡El Petróleo es el nuestro!" It is a self-destructive path which Mexico must avoid at all costs.

I am going to blog this issue in the future, but I want to get some more information first.  For the moment I am very thankful to have access to your views Gustavo.

Thank you John and StJacques for your valuable comments and for the additional amount of information you contribute to this topic. There is no doubt that this issue of state control and management of the oil industry is one of the strongest components of Latin American underdevelopment.The examples jump at us. 30 years ago Petrobras was just like PDVSA and PEMEX are today. Look at it now! after partial privatization and solid, professional management took over.
15 years ago PDVSA was like Petrobras is today but Chavez has turned it into a political tool. Production is down, corruption is sharply up. No exploration of significance is being done. PEMEX, PDVSA, YPFB (Bolivia), ENARSA (Argentina) are tragic examples of the "religious" approach to managing a resource.

A remark on nationalized oil companies. I worked for an American oil services company in Latin America for four years. A German co-worker, who had spent nearly his entire life in Latin America, said of a YPF professional we dealt with on the rig: Ricardo was too competent at his job and too nice a person to rise in the YPF hierarchy. (After the demise of YPF, Ricardo is now working for a private oil company in Argentina.)

I've been looking for a new job and i found a very good [url=http://www.headhunterfinder.com]executive search [/url] directory.
Hope you find a nice job too!

Anybody that has ever had writer's block will appreciate a method called "brain dumping" that allows you to write as fast as possible, without thinking. Just keep writing anything that comes to mind. Every single idea that comes to mind, just write it down fast. While breakdown that inner wall using this speed writing method. As you write down this content, the spelling, grammar and punctuation will not even be considered during this process. Once you are done writing everything, you will not believe how much content you have actually have. Remember, you just want to write down everything that comes to mind. Once you have everything written down, just restructure and proofread the article before you use it.

Achieving success with speed article writing is not a one day thing - it will take patience and consistency on your part, which is why you should always try to be as focused as possible.

It's truly very difficult in this full of activity life to listen news on TV, thus I simply use world wide web for that purpose, and get the most recent news.
Also visit my weblog http://nolongeryourex.com

With havin so much content and articles do you ever run into any problems of plagorism
or copyright infringement? My blog has a lot of exclusive content
I've either authored myself or outsourced but it appears a lot of it is popping it up all over the internet without my authorization. Do you know any techniques to help reduce content from being stolen? I'd definitely appreciate it.