Battling corruption in PDVSA: anyone for tennis? 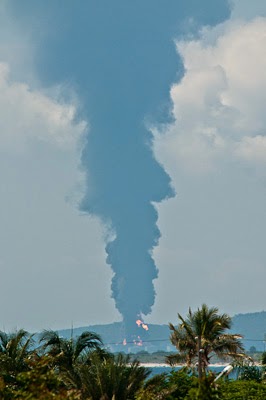 FIre at PDVSA's BOPEC, Bonaire due to lack of maintenance

Among the several deficiencies of the Venezuelan oil company, Petroleos de Venezuela, PDVSA during the last 15 years, one of the most important is transparency. Any company should have it but especially a company that supplies 96 percent of the total foreign exchange income to a nation. When things are not well in PDVSA they cannot go well in Venezuela.
The PDVSA of these Chavez-Maduro years has been notoriously corrupt and has discarded the fundamental principles of transparent management. For example, many important contracts, amounting to hundreds of million dollars, have been and are being assigned to contractors without a bidding process. This practice inevitably leads to corruption.  I should rather say that corruption, as a corporate attitude, leads to the practice of no-bid. If a manager or a group of managers wants to commit a corrupt act they will try to avoid a transparent bidding process. The common “justification” for the no-bid contract is urgency. But, whereas in an honest corporation, urgency is an exception in PDVSA it has become the rule. This has led to corrupt contracting such as the rental of the offshore barge Aban Pearl to an intermediary company of friends, the acquisition of drilling rigs to ghost companies with only three or four employees, as admitted by former member of the PDVSA Board, Luis Vierma, in the Venezuelan National Assembly, the assigning of contracts to companies that have no experience or capability to do the job and simply sub-contract the work, as it has been pointed out in the case of Derwick Associates or the contracting of companies owned by relatives of the manager (s), as in the case of Ecoinca, a company whose president was the husband of the manager assigning the $99 million contract, an act denounced by now deceased Venezuelan legislator Luis Tascon.
This practice has had the effect of making Venezuela much poorer and a group of dishonest Venezuelans much richer. The practice flourishes because we are witnessing a process of systemic prostitution in government. In a country where checks and balances exist these deviations could be minimized, as is the case in the democratic and civilized Scandinavian countries. In Venezuela, however, checks and balances do not exist, allowing corruption to flourish in an environment of extreme impunity. I do not exaggerate in saying that the whole system is deeply rotten. It works as follows:
PDVSA commits a corrupt act > PDVSA ‘s corruption is rarely  reported in the media for fear of retaliation > If reported it is rarely, if ever, is investigated by officials >  If investigated by independent  citizens the accusation will  not be considered by the National Assembly, or by the Judicial system , or by the Supreme Tribunal of Justice,  or by the Attorney General ,or by the General Comptroller , or by the Ombudsman because  all of these institutions are in the hand of crooks who directly or indirectly participate in the tragic sacking of national resources> If the independent investigator raises too much noise he, she will be accused of treason, of trying to assassinate the president or will be subjected to a campaign of personal discredit, as has been the case with the blogger Alek Boyd, one vox clamantis in deserto> International instances will refrain from criticism for fear of being accused of interventionists.
This cycle repeats itself endlessly, essentially   beyond the comprehension of the general public. This explains why so many of the regime’s top officers have amassed huge fortunes without fear of being brought to justice. The names of enormously rich bankers, PDVSA contractors and top government officers circulate freely in Venezuelan social circles or, in veiled form, in the media due to the fear of violent retaliation. I recently mentioned a case linking a PDVSA contractor with a bank and immediately received not one but two letters by lawyers designed to scare me into keeping my mouth shut. The battle between civic honesty and government corruption in Venezuela is highly asymmetrical. It is almost a miracle that it exists at all.
I want to keep on battling. I ask for the cooperation of those individuals or organizations that can help me, us in this battle, supplying information, legal advice and/or material support.  I have (not necessarily enjoyed) a combination of factors that has made possible, so far, my participation in the reduced army of Venezuelans denouncing corruption in the Venezuelan petroleum industry: 1. I live abroad. 2. I have little to lose. 3. I am 80 years old and have no future ambitions. 4.  I am a petroleum expert and I have spent 20 + years studying the problem of corruption in Venezuela, I am rarely deceived.
This is a relatively rare combination, which allows me to speak up when others who would like to do the same opt for keeping silent. Due to the reasons I have described above I do not blame them but I am sure they will help whenever they can.
As Humphrey Bogart asked once: Tennis anyone?
Gustavo Coronel
gustavocoronelg@hotmail.com
703-6225278