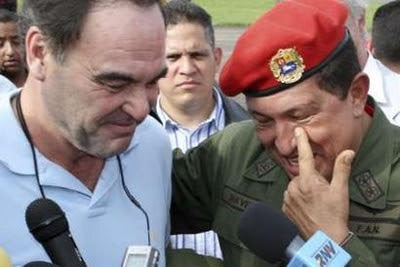 Stone and friend (in disguise as a paratrooper)


Hugo Chavez is fast replacing Fidel Castro as Hollywood’ s favorite dictator. He started three years ago by collecting Castro and Aristide’s fan Danny Glover, also known as a defender of Sadam Hussein. As leader of TransAfrica Forum Glover has traveled to Venezuela many times, all expenses paid by Chavez and often in Venezuelan government aircraft. He has recently been given $18 million by Chavez to finance a film about Haiti’s XIX century black leader Toussaint L’Overture. He has been an important factor in the attempt by Chavez to create an artificial racial conflict in Venezuela, a country that has a largely mestizo population, few pure whites and even fewer pure blacks.
Glover was the first Hollywood figure to visit Chavez but has not been the only one. Harry Belafonte, Sean Penn, Kevin Spacey and, now, Oliver Stone, have eagerly accepted invitations from the Venezuelan dictator. After Glover’s jackpot they probably felt that they would also have excellent chances to receive financing for their own projects, especially if they smiled often and said nice things about the tropical strongman.
Oliver Stone has just been in Venezuela participating, next to a Chavez grotesquely disguised in combat uniform and red beret, in the undignified show put up by the strongman in occasion of the release of three of the hostages of FARC, the Colombian narcoterrorist organization that has found in Chavez an enthusiastic ally. In Chavez’s views the FARC are not a terrorist, drug-trafficking organization but, simply, a group of political dissidents that should have a place under the sun. In spite of the fact that they have killed and kidnapped hundreds of Venezuelan citizens Chavez has refused to classify them as a terrorist organization, has allowed them to use Venezuelan territory as sanctuary and is reported to have provided them with arms and ammunitions. In keeping a close and friendly relationship with them Chavez has undermined Colombia’s democratic government. This close relationship is what has made it possible for him to receive the three liberated hostages, a move designed by the FARC to place him in a more favorable international light, after his recent political defeats both at home and in the international scene. Former Colombian Foreign Minister, Fernando Londoño, affirms that Chavez has paid the FARC a significant amount of money for the release of these hostages, money that will be used by FARC to further threaten Colombian democracy. Londoño further states that the coziness between Chavez and the FARC is related to the immense amount of cocaine, more than 300 tons per year, being

transported through Venezuela by the FARC with Venezuelan military protection.
Oliver Stone is an old admirer of dictators. He has produced two documentary films about Fidel Castro. When returning from the first of his several visits to Cuba he said: “I observed an openness and freedom in Cuba that I had not found in any other country in the region, the Caribbean or Central America…. I have never seen the kind of spontaneous affection for a leader on the streets as I have seen in Cuba towards Fidel”. These are the words of an ignorant or a fanatic, as most of the Latin American countries, except Cuba and now Venezuela and Bolivia, have freedoms and democracy not found in sad and repressed Cuba. In talking about Fidel Castro he said: “He is presented as a bad guy, and it all stems from Nixon’ meeting with him, calling him a communist and anti-American”. Stone discards Castro’s own numerous admissions of being a communist, forgets about the thousands of dead under his regime, the hundreds of political prisoners in Cuban prisons and the testimonies of those who escaped from Cuba’s living hell. Castro’s perversion and oppressive regime of almost 50 years is, in Stone’s view, just a figment of Nixon’s imagination.
Such an atrocious disregard for the truth comes through in some Stone’s movies such as “JFK” and “The Midnight Express”, where he forces history to fit his preconceived ideas. His private life is consistent with his fanatical love for dictators. He is or has been a heavy drug consumer and has been caught several times by the police driving while intoxicated.
To leave no doubt about his preference for dictators Stone has asked Ahmadinejad, the Iranian nut, for permission to make a film about him. Yesterday, in Venezuela, while basking in Chavez’s company, he said: “This is wonderful. I never thought I would be a part of this”. Obviously he feels that by participating in Chavez’s insensitive and obscene vaudeville, full of helicopters, ambulances, politicians, journalists and, even, two or three poor hostages finally being let go by the terrorists, he is making history.
Chavez uses him and, of course, he uses Chavez.
Publicado por Gustavo Coronel en 5:18

Yet another useful idiot bowing to the autocrata rojo, rojito. I expect nothing of these people.

What I have always found quite interesting, though never knew how to express my feelings toward it, is Chavez's qualification of the FARC terrorists as political dissidents. If he is so keen on allowing said political dissidents have their place "under the sun," as you have so eloquently termed it, one would think that logically he would extend the same courtesies to those who do not agree with the policies of his roboilusion bolibanana. Though, logic tends to not shine through in Orwellian societies...