Universities are no place for the totalitarian temptation 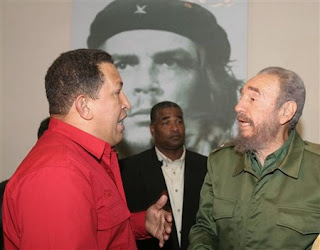 Two killers and a thief


Academia is the land where man goes to search for the truth. Too often, however, searchers are faced with rigid dogma instead of an environment favorable to the finding of the truth. I have just read a letter by Professor John M. Kirk from a reputed Canadian university, in which he lauds Hugo Chavez as a paladin of the poor. I searched Google for more information on Professor Kirk and found he has written several books in defense of the totalitarian Cuban regime that has been in power for half a century. Of course, he is not alone in his defense of the Cuban regime and now, by extension, in his approval of the Hugo Chavez regime in Venezuela. Many years ago, when I obtained my Master in International Public Policy from Johns Hopkins, one of my professors, Wayne Smith, was extremely sold on the Castro government. And still is. Wayne is a very nice gentleman, by the way, but totally convinced that a totalitarian regime was something that should be defended.


There are other examples of this pronounced affinity of University professors with totalitarian regimes. Miguel Tinker Salas in Pomona College is one of many who sing the praises of totalitarianism in a U.S. college and does it in total academic freedom. I suspect that in the U.S. there are dozens, if not hundreds of university professors preaching the excellence of totalitarian regimes. And I ask: what makes them do this?  I admit that they, as members of the academic community, have a right to believe in the excellence of totalitarianism. I would not deny them this right. What I would ask them is why they support regimes that clearly and strongly oppose the free discussion of ideas and the search for the  truth in their own academic institutions. Why do they support regimes that will not allow or respect political dissent in their countries?  If Professor Kirk was teaching in Venezuela he would find that whoever teaches democracy in today’s Venezuela is seen as an enemy of the state and has to pay penalties for this. If Tinker-Salas wanted to teach democracy and a free search for the truth in Cuba he would not be allowed to do it. Castro said it once and for all: “Within the revolution, all. Outside the revolution, nothing”.


In today’s Venezuela the situation is equally  dramatic. The Chavez regime is creating universities of very low academic quality where political indoctrination is the norm (Universidades Bolivarianas). And they compound the crime by naming them “Bolivarian”, after the Venezuela national hero. Public Universities, such as Central University and Simon Bolivar University, where political dissent exists and where democracy is still alive, are denied funds by the state and vandalized by hooligans. Chavez gives more money ($50 million per year) to finance car driver Pastor Maldonado’s racing in Formula One than the money given to finance Universidad Simon Bolivar and its 8000 students. Private universities such as the Catholic University and Metropolitana, in Caracas, are the object of scorn by the regime.


Venezuelan universities have been the cradle of Marxism and political extremism for many years. During the democratic years this was tolerated but under Chavez this is promoted. Marxist professors dominated the School of Economics of the Venezuelan Central University for years. They injected the Marxist poison in thousands of our youth during the second half of the XX century and were allowed to do so under the umbrella of freedom of teaching. Today, when they are part of the political establishment in power they actively persecute teachers who oppose Marxism.


One has to ask the reasons why college professors living in free countries advocate the way of life of countries where freedom does not exist. Perhaps the answer lies in the territory of Psychopathology.  It probably has to do with what Erich Fromm called “the Fear of Freedom” and Jean Francois Revel “‘The Totalitarian Temptation”. Many persons prefer to abdicate their free will in favor of strongmen who will order them what to do and what to believe, in exchange for monetary handouts and subsidies, creating a patron-client, or worse, a master and slave relationship. This is what has happened in Cuba and what is happening in Venezuela. One would understand that the poor and the ignorant see this as a valid alternative. But that this should also be the alternative chosen by many members of academia, even in developed and democratic countries, is much more difficult to explain.


Can anyone explain it to me?
Publicado por Gustavo Coronel en 11:28

For those poor Latin American subjects involved, it's simply an extension of Spanish Colonialism/Hacendado feudalism where the subjects are "taken care of" by the "patron." For the comfortable Leftist (I assume your professors would not tolerate the totalitarian "right")university professors, living in safe functioning egalitarian democracies, it's simply an extension of theoretical/unworkable Marxism, which they would not tolerate in their own countries of residence.

You are right ! If such an Academic can loathe and write such Books in favor of Cuba and Fidel, it just shows what Canada is ! Just that: A totalitarian police state ! Other than it being alleged freedom of speech and writ ! Believe me, get into somebody dirty politico muck in USA, and Bible religion or Evolution, and you will find out what freedom of speech and writ is !

THIS GUY FROM academia CANADA, is an intellectual disgrace !

Amazingly the University of Toronto has one of the best Academics: EVAN THOMPSON - Philosophy and Conscience !

Fanstastic un-biased blog ! I congratulate you !

Keep it to English, and we might get some "red" chavistas off of here !

The mentality among some “intellectuals” in these first-world countries is that totalitarian redistributionist regimes are ok in countries such as Venezuela and Cuba, where elites are evil and the rest of the people are primitive to the core. Of course they, as advanced as they are, do not deserve any form of dictatorship.

This is in fact an extremely racist view, the prime example of whom among French academia.