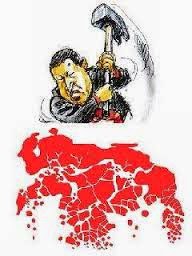 One of the three main culprits of the Venezuelan catastrophe, president of PDVSA and Minister of Energy and Economy Czar, Rafael Ramirez, will visit New York City in September to try to sell a new emission of Venezuelan bonds, which would serve to pay $4.5 billion in maturities of previous bond emissions. This looks very much like a Ponzi scheme: getting money from B to pay A.
Financial analyst Russ Dallen has reported that this will be a “more exciting roadshow than the average”, since angry holders of Venezuelan SIDETUR bonds are still waiting to get paid after the expropriation of the company in 2012. Venezuelan expatriates, adds Dallen, might use the visit to protest against Ramirez.
I will be asking my contacts in that area to join in such a protest and will try to put together a group that might travel to NYC to be there for the meeting.

In the meantime it is necessary to warn potential investors about the financial, economic and social chaos prevailing in Venezuela today. It would be highly risky for any investor to buy into Venezuelan government bonds at this time. Although I know they do their financial homework I do not know if they are equally aware of the true magnitude of the social and political instability in today’s Venezuela. In comparison with the Venezuelan situation Argentina looks like a very stable economy. The country is on the verge of total paralysis, due to the ineptitude of the government. In particular, the petroleum industry is in near total disarray.

Bueno no me refería a ninguna insinuación de segundo sentido!

Investors: be aware.... Venezuelan Government ready to perform a Ponzi Scheme... will the 'buitres" take the fall?? Will Venezuela be next Argentina leaving investors holding the bag? OMG!!! According to Desdichado Cabello future Venezuelans will be the payers... vivir en la misera es salud e elimina la pobreza, je!!