IN VENEZUELA: STARVING IN THE DARK 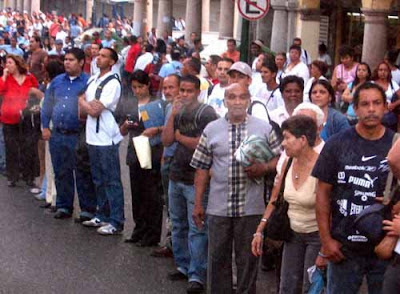 Waiting for a bus, metro out of action 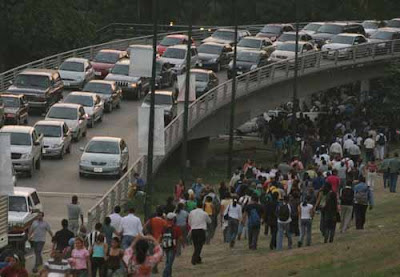 The Chavez revolution is ending in the manner predicted by political scientists for populist leaders, in anomie. What started ten years ago as a promise of change for the better has been converted into a nightmare. $600 billion later Venezuelans are as poor and as ignorant as when Chavez arrived in power. But now, afflicted with an additional plague: class and racial hatred, something we did not suffer before. More so than financial collapse and lack of infrestructure, this will be the most tragic legacy of the Chavez regime. A few days ago, on top of the long lines Venezuelans have to make to buy food, there was a blackout in half of the country. It was blamed on forest fires but the real reason is the lack of maintenance in the electrical generation and distribution systems in the country. The minister responsible for the electrical sector is the same one responsible for the petroleum sector 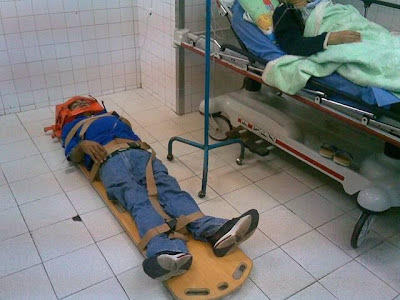 Medical attention at the University Hospital, in Caracas.
but he is now too busy importing food. Is it a wonder that Venezuelans are starving in the dark?
Publicado por Gustavo Coronel en 7:36

The Presidential bracelet appears fearless and powerful the main rolex replica sale why it is simply being popular among today's young professional older women. However beautiful watches. Seeing as there are so many value hublot replica uk available, how to pick a suitable one. Figures of the choices are crafted during top grade resistant fake rolex sale such as well as titanium and rubber, plus the posh touch of yellow gold and steel. One think to look at is that if replica watches sale it sounds of course good to turn out to be true, or can be a once living in a life point in time offer, it is probably a fraud. A new salon stations at hair, tanning, fasteners and replica watches sale all require multiple towels. David Beckham has already been photographed wearing a person on a number of occasions. This eliminates the interest in the breitling replica sale customer to need to be hand-wind the watches.