Viaje a Tulsa, corazón de América/ A trip to Tulsa, the heart of América 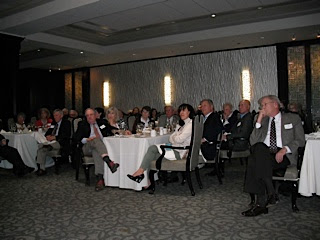 VENEZUELA:  OIL, POLITICS AND OUTLOOK
1.    Venezuela has been traditionally identified with oil, politics, beautiful women and baseball. Now, unfortunately, we have to add drug trafficking. Oil and Cocaine exports are the two main industries in the country and, sadly, both are run by the government.
2.   Women are still beautiful and they keep winning international beauty contests, significantly helped by our superb plastic surgeons. Miguel Cabrera keeps winning batting titles in the major leagues where there are about 110 active Venezuelan players.

LET ME GIVE YOU SOME BAD NEWS AND SOME GOOD NEWS ABOUT VENEZUELA
THE BAD NEWS
3.    Venezuela has been living a great tragedy. During the last 16 years the government has run the country into the ground.  Let me give you some  statistics:
·      National income during these 16 years has ben  $2.3 trillion, the highest ever, thanks to the increases in oil prices during 2003-2008
·      In spite of this huge income National debt has increased from $23 billion in 1998 to about $200 billion in 2015
·      Oil production has declined from 3.2 mmbd in 1998 to 2.6 mmbd in 2015, while oil industry employees have quintupled during this period
·      About 400,000 barrels of oil per day are being sent to ideologically friendly countries such as Cuba, Nicaragua, Bolivia, Argentina, Jamaica, at non-commercial prices.  The regime has transferred about $50 billion to these countries in the last 16 years.
·      Another 400,000 barrels per day are sent to China to pay for a $50 billion loan that has already been mostly spent on political programs
·      Today, oil exports to the U.S. are  less than half the volumes of 16 years ago
·      In spite of the significant oil income poverty is greater now than when Chavez came into power. Today food, medicines and essential domestic goods are difficult to find and Venezuelans have to make hours-long lines to buy what they can find.  Even Toilet paper is scarce
·      Venezuela has the highest inflation rate and the second highest murder rate in the world. It is also one of the 10 most corrupt countries in the world according to Transparency International
4.   As if this was not bad enough the Chavez-Maduro regime has aligned themselves with rogue governments: Libya, Iraq, Cuba, Nicaragua, Belarus, Syria, Zimbabwe, even North Korea. And with the main terrorist groups: FARC in Colombia, ETA in Spain; Hezbollah in the Middle East. The connections with these countries and groups are very well documented.
5.   Evidence is mounting about the involvement of army generals and high level government officers in drug trafficking. Nephews of the President have been captured in Haiti trying to smuggle 88 kilos of cocaine into the U.S. They are in prison in New York, awaiting trial, being defended by Squire Patton Boggs, a prominent legal group based in Washington DC that serves the Venezuelan government.
6.   You might be thinking: why have the country and the Region allowed this tragedy to take place?  And the answer is simple and tragic: MONEY. Chavez instituted a national policy of handouts, supported by the huge oil income, distributing free food, free medicines, even free houses, to his followers. He also gave abundant cash and subsidized oil to friendly governments to keep them under his political influence. In doing this he was helped by the historical resentment Latin American governments have had against the U.S.  Voting at the OAS is controlled by Venezuela through the block of Caribbean countries that receive subsidized oil.
7.   What is the role of the military? This disaster could have been averted if the military had played its proper role as guarantor of the Constitution.  What happened was the opposite. The military became an accomplice of the regime, to the extent that Venezuela has a predominantly  military government in which there are more than 200 active military officers holding government positions, while Generals and lesser ranks are actively participating in drug trafficking. This has effectively closed the door to civic rebellion, since the armed forces have all the guns.
8.   Venezuela today is materially and spiritually bankrupt.
9.   I believe I have given you all more bad news about Venezuela that you are able to digest. Now for the good news.

THE GOOD NEWS
10.                  Last November 22, the corrupt government of the Kirchners in Argentina ended and a democratic president will take charge. In Cuba Raul Castro says that he is surrendering power in 2017 while Fidel is now just a bad dream. In Brazil Lula could be going to prison and President Dilma Roussef is close to being impeached. Rafael Correa in Ecuador has said, as Duran said in his fight against Sugar Ray Leonard: NO MAS. Latin American dictators and demagogues seem to be in the way out.
11.                    In Venezuela the government of Nicolas Maduro, imposed on Venezuelans by deceased dictator Hugo Chavez, seems to be under great pressure, after the legislative elections of last Sunday. The opposition now controls the National Assembly and has gained a 2/3 majority that will allow it to introduce great political and economic changes. This election has marked a radical turning point in the Venezuelan political situation and signals the end of the Chávez era.
12.                   There is a wave of liberalization in Latin America. This means private investment will be able to return to the region and there will be still another chance for democracy to show that it is a preferable system to dictatorships and demagoguery.

WHAT SHOULD THE U.S. DO ABOUT VENEZUELA?

In summary, apply all possible pressure against the abusive Venezuelan regime. This could be difficult to achieve in the short term, as President Obama has Cuba as top priority and will not want to do anything to jeopardize these newly found relations.