DEANS OF LAW OF ALL VENEZUELAN UNIVERSITIES DEMAND THE NULLITY OF THE CONSTITUTIONAL REFORM BEFORE THE SUPREME TRIBUNAL OF JUSTICE. 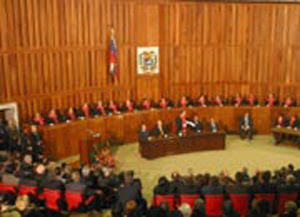 THE DEANS OF LAW OF ALL VENEZUELAN UNIVERSITIES DEMAND THE NULLITY OF THE PROPOSED VENEZUELAN CONSTITUTIONAL REFORM BEFORE THE SUPREME TRIBUNAL OF JUSTICE.
6 p.m. on Tuesday, November 20, 2007.

In an unprecedented step the Deans of Law of all Venezuelan universities are asking the Venezuelan Supreme Tribunal of Justice to declare the nullity of the proposed constitutional reform that Hugo Chavez pretends to impose on the Venezuelan people.
The basis for the legal action by the deans is that they consider that the Venezuelan National Electoral Council, CNE, ‘has not fulfilled its proper role as an autonomous and constitutional entity”. This is so because the Council limited its participation to accepting the text of the reform as “a subordinate and instrumental agency” rather than doing its job of analyzing the contents and nature of the reform o verify its constitutional validity. If they done so, the Deans add, they would have been able to see that the proposed reform is illegitimate and vitiated since “it attempts to redefine the nature of the Venezuelan State”. “By trying to include a new fundamental principle of constitutional order such as Socialism” the deans stated, “the proposal goes beyond a [minor] reform and will have a deep influence in Venezuelan social, political and economic life” The deans demand the suspension of the referendum slated for December 2 until the substantive legal matters are resolved.
NOW WHAT?
If the Supreme Tribunal of Justice did its job properly it would move immediately to suspend the referendum and, eventually, to declare the proposed reform illegal. I have many doubts that they will do this. They are a bunch of marionettes with personal agendas to advance and economic interests at stake.
But, who knows? It’s close to Christmas and miracles happen at around this time of the year.
Publicado por Gustavo Coronel en 15:09