PLEASE MR. CORREA: DO NOT HELP US VENEZUELANS! 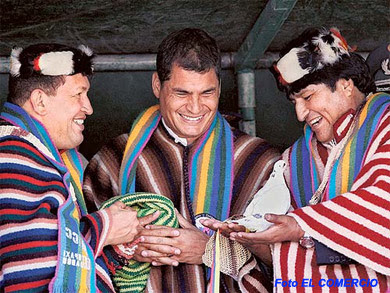 A MEMO FOR RAFAEL CORREA, PRESIDENT OF ECUADOR.

Mr. President:
I just read a report in El Universal of Caracas, dated November 11, 2007 (“Correa proposed to Chavez the elimination of the autonomy of the Venezuelan Central Bank”), in which you feel proud of selling Chavez this course of action. I think you have made three serious errors.
The first error is to admit publicly that you intervene in Venezuelan internal policy-making. This is something that we suspected but now we know. We do not need your advice. Please concentrate your efforts in solving the problems of your people and refrain from imitating the impudent interventionism of Hugo Chavez in Bolivia and in your own country. Do your work in Ecuador within democratic rules and leave vulgar and arrogant behavior to louts like Hugo Chavez or Daniel Ortega.
Your second error is to claim publicly that you have “influenced” Hugo Chavez. This will bring you real trouble because Chavez is a narcissist who resents being told what to do by lesser mortals. You have offended Chavez and he will retaliate because you cannot minimize his ego and get away with it unscathed.
Your third error is political. Ecuador has a Central Bank and now everyone should expect you to do with it what Chavez has done to our Central Bank: raid its international reserves, eliminate its autonomy and convert it into a political tool. You should know that all civilized countries have a Central Bank with a certain degree of autonomy without which the institution would be a puppet of whoever occupies the presidency of the country. Monetary policy cannot be left to ignorant leaders because that amounts to putting a machine gun in the hands of a chimpanzee. Chavez has already said that he would like to replace Venezuelan currency for “local” money designed for barter, money that, as in Zimbabwe, would be valid only for a short time. Mercenary Marxist Heinz Dieterich has advised Chavez to follow Socialism for the XXI Century, including the replacement of money with the “work hour”. He claims that the “work hour” of a street cleaner has exactly the same value than the “work hour” of a neurosurgeon (he also claims that street cleaners are more beneficial to society than neurosurgeons). This is the type of Socialism of the XXI Century you are also advocating. Forty-seven countries (I have the list) have gone down the drain in history for following similar recipes. Venezuela and Ecuador are now in the same path, thanks to an ignorant paratrooper and his spontaneous advisers.
Mr. President. Please, do not help us! 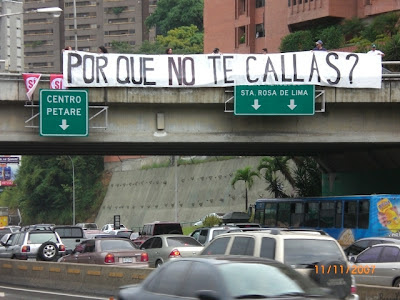 Is that digital fauxtography, or is that a real picture?

I assume you are asking about the big poster POR QUE NO TE CALLAS. This was put up very early this morning in the Autopista de Prados del Este, in Caracas. It is a photograph. In fact, thousands of drivers honk as they go by.Who knows how long it will be there before someone pulls it down. Best regards, gringo.