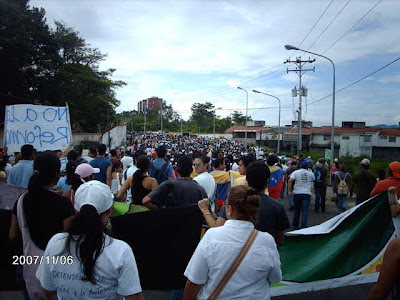 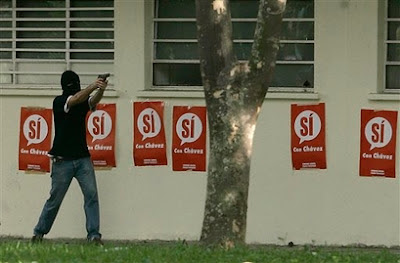 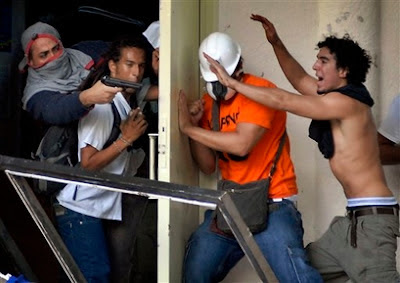 Chavez thugs try to invade the University of Caracas

BANDS OF VANDALS CONTROLLED BY CHAVEZ ATTACK UNIVERSITIES AND STUDENTS ALL OVER VENEZUELA.

Reacting violently against peaceful protests of university students bands of thugs controlled by the chavez regime, with masks and guns, invaded the Venezuelan universities in a concerted effort today, shooting at least one student dead and wounding at least a dozen others. These violent attacks have taken place in Caracas, in San Cristobal, in Merida and other Venezuelan cities and seem to demonstrate that Chavez has decided to start a large scale repression against the Venezuelan people who oppose his pretensions to become president for life. 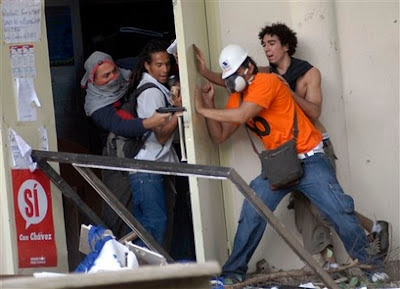 Reliable news are scanty but there seems to be an intense political process unfolding in Venezuela at this moment. The university student protests are coming on top of the public posture of former Minister of Defense Raul Baduel denouncing the Chavez proposed Constitutional Reform as a "coup d'etat" and calling on the armed forces and the Venezuelan people to reject the reform. Although Baduel is calling Venezuelns to vote in rejection of the reform millions of venezuelan feel that this is no time for voting, especially given the lack of tranprency surrounding the Venezuelan electoral system, but the time for civic rebellion.
Publicado por Gustavo Coronel en 15:54