REPORTING ON A PERSONAL CRUSADE FOR DEMOCRACY. 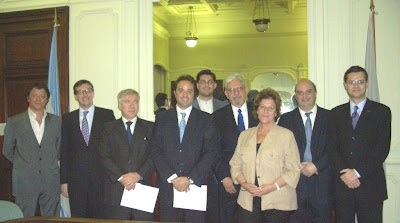 With Argentinian legislators, in Buenos Aires.

EXPOSING THE CHAVEZ NIGHTMARE IN LATIN AMERICA.
From Washington.
Yesterday I came back home after a twelve-day trip to southern Latin America. During those days I took eight planes, gave ten conferences/talks, five newspaper interviews and participated in five TV programs and four radio programs. The topic: Hugo Chavez: Corruption and Socialism of the XXI century. I gave factual and statistical data to show how Hugo Chavez had converted Venezuela and is trying to convert Latin America into a new Cuba and how public policy making in Venezuela has given way to an authoritarian, power driven regime. I spoke to audiences made up of university students, teachers, industrialists, intellectuals, politicians and housewives and, in all of them, I found amazement at the degree of corruption and ineptitude that Hugo Chavez has generated in Venezuela and about his efforts to export his hate of democracy beyond Venezuelan borders.
My speaking tour was made possible by CATO Institute, a private, Washington DC based think tank and by half a dozen NGO’s in the countries I visited that provided lodging and logistical support.
First stop.
I first went to Buenos Aires, invited by the Foundations Libertad, Atlas 1853 and PENSAR. I was received by a group of legislators of the city of Buenos Aires. In their beautiful headquarters I gave them a presentation on the Venezuelan situation. They could not believe that Hugo Chavez had received almost $300 billion in oil income during the last nine years and, on top of that, had managed to increase three times the Venezuelan debt. “Where has this money gone?” they marveled. I told them that much of this money had gone to feed the regimes of his ideological friends: Castro, Morales, Ortega, Correa and some opportunistic leaders such as Kirchner. Some has gone to buy weapons and a lot of it has been dedicated to institute a system of handouts to the Venezuelan poor. This system has given the poor an illusion of prosperity without solving, – indeed – deepening, their poverty and unhealthy dependence on the paternalistic government.
The six-column interview I gave to “La Nacion”, the most influential newspaper in Argentina and probably in South America, was picked up by over 20 newspapers and publications all over the hemisphere, including three Venezuelan newspapers and the Miami Nuevo Herald. In this interview I accused Chavez of corruption, defined not only as stealing public monies but also as the use of public assets for personal use, the handing over of national monies to other governments, the naming of inept relatives and friends to public office and to allow the highest level of government corruption ever recorded in Venezuela.
My conference in Buenos Aires was held at the University and Center for Macroeconomic Studies of Argentina, UCEMA. I gave a TV interview to Roberto Cachanovsky that can be seen in http://www.elcato.org/node/2689ode/2689 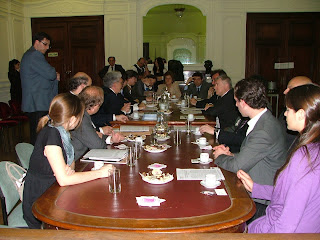 as well as three radio interviews and another press interview to Tucuman’s El Diario.
Of course, this visit of mine was a drop of water in the bucket, as compared to the huge, massive meetings organized in Buenos Aires for Chavez by the “piquetero” leader Luis D’Elia and by the hateful Heda Bonafini, events that cost Chavez a few million dollars. However, it has served to illustrate a segment of public opinion in Argentina about the real, macabre, nature of the Chavez regime. 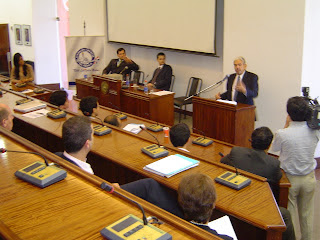 Second Stop.
From Buenos Aires I went to Asuncion, Paraguay, as guest of the Freedom Foundation and two other non-government organizations. I went to the beautiful Club Centenario to meet with a group made up of high-level diplomats, politicians and members of the military to discuss the Venezuelan political situation and the attempts Chavez is making to intervene in the internal political processes of Paraguay. The group discussed intensely the presidential run of Fernando Lugo, a former priest that has embraced Chavez’s “ideological” posture, the so-called Socialism of the XXI Century, really not an ideology but a political strategy. In Paraguay there is almost an obsession to get rid of the dominance of the Colorado party that has been in power for many years. This has led to the belief that almost any other option would be preferable. I reminded the group that some changes could definitely be for the worse, as Chavez’s example illustrates so well.
Next day I gave my talk at the Cultural center of the city, the Cabildo. The talk had been planned for the Club Centenario, but, at the last minute, we were prohibited from using this place. I also gave another, briefer, talk to a group of young Paraguayan leaders associated with the Freedom Foundation.
In Asuncion the two main newspapers of Paraguay interviewed me: ABC Color and Ultima Hora, both already published.

Third Stop.
From Asuncion I traveled to Santa Cruz, Bolivia. This city has become the center of civic protest against the attempt of Evo Morales to establish a Constituent Assembly identical to the one Hugo Chavez used to destroy Venezuelan democracy. The movement of civil society led by Santa Cruz has spread to Cochabamba, Pando, Beni and Tarija, four other provinces of the country where most of the Gross Domestic Product is generated. As a result Morales is on the defensive and, according to a Santa Cruz civic leader, “he still governs but cannot rule”. The example of Santa Cruz is extremely important for the region because it shows how a decisive, well-organized popular protest can check the authoritarian ambitions of political leaders. In Venezuela this happened in April 2002, when a massive march ended, briefly, the presidency of Hugo Chavez. This is, probably, the most effective manner to oust undemocratic Latin American leaders in countries 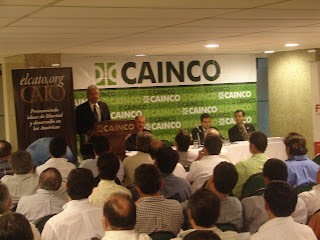 where the electoral system is politically controlled by the strongman in power.
In Santa Cruz I gave three conferences in one day, early afternoon, late afternoon and evening, to more than 500 people. The people of Santa Cruz are indignant against the gross intervention of Hugo Chavez in the affairs of Bolivia and the submissive attitude of Morales vis-à-vis Chavez.
I also participated in two TV programs, in a one-hour radio program and was interviewed by El Deber (reproduced in my blog), the most important newspaper in the city.
In Santa Cruz I found, shining bright, the torch of freedom.

Fourth Stop.
I next went to Santiago de Chile, the neatest, most civilized of all Latin American capitals. I saw right away the reasons for Chile being a first world country. It has to do with the attitudes of the people: discipline, cleanness, civic pride, tolerance, and republican simplicity. My hotel was three blocks away from President Bachelet’s house, located in Burgos Street, a dignified but unassuming home, similar to others in the neighborhood. A single, middle age, uniformed guard stood at the door. I said good morning and got a warm reply. I felt nostalgic about the years in which our Venezuelan presidents exhibited the same civil attitudes. Today, there is grotesque military paraphernalia of tanks and Cuban bodyguards surrounding the fortified place where Chavez has his nightmares.
In Santiago I participated in a TV program at the Catholic University of Chile and was interviewed by La Segunda, an afternoon newspaper. My conference was held at the headquarters of the Foundation “Freedom and Development”, Libertad y Desarrollo. The audience was surprised at the picture I painted, the high levels of corruption, the tainted Electoral Registry, the policy of handouts through which the national funds of Venezuela are being pilfered, the loss of Venezuelan sovereignty to the Cubans. In Chile there is little knowledge of the Venezuelan tragedy since the country is looking away from the region, towards Europe and the U.S. and the rest of the developed world. Chileans do no longer see themselves as part of a Latin American pack steadily falling behind Europe, North America and Asia and feel disdain for the antics of leaders such as Chavez. Some Chileans in positions of power, however, use Chavez for his own agenda. This is the case of the OAS Secretary General, who is, inexplicably, one of the defenders of Chavez in the region.
--------------------------------------------------------
In two weeks I go on the second stage of my personal crusade against dictatorships and authoritarianism in Latin America. I sense in the region a real thirst to know more about the real nature of Hugo Chavez and about the impact that his obsolete political attitudes will have on the rest of the hemisphere. In spite of the immense expenditure in the enhancement of his political image Hugo Chavez finds himself increasingly rejected by Latin Americans. Indeed, possibly only Evo Morales remains as his unconditional ally. Others who appear sympathetic, like Correa in Ecuador, Ortega in Nicaragua, Kirchner in Argentina, even Lula in Brazil, are only in for the free ride. They have great misgivings about him in the privacy of their offices. Chavez has become, in their eyes, a Bucaram (a president from Ecuador who also sang and danced instead of governing) with money. The money Chavez distributes with largesse to hired guns in Europe and the U.S. is not buying him loyalties.
I feel we are in a battle for Latin American democracy, against despotism. This battle has been fought before and, almost always, democracy has won. This time will not be different.
Publicado por Gustavo Coronel en 6:24

Well done Gustavo, keep at it if you can.

I agree with what you say and am frustrated by the lack of media coverage of the dreadful situation in Venezuela. The BBC sits on the fence and has double standards. Actions that would cause outrage in Europe are let go without comment: 'It is just Latin America'. The BBC and European media would do well to remember that Venezuelans have families and need to make a living - they value personal freedoms just as much as the British.