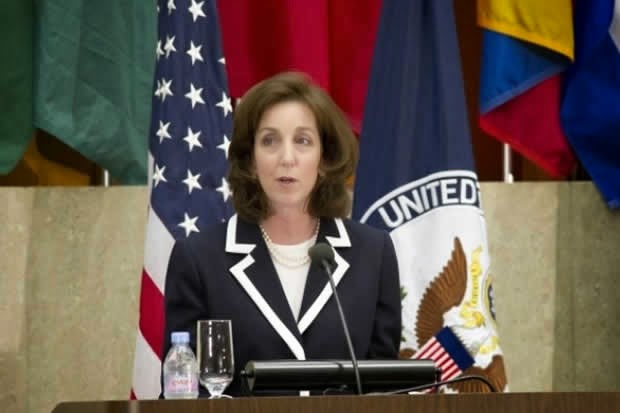 Under Secretary of State for Latin America
Dear Mrs. Jacobson:
In a speech given today, April 3, at the Brookings Institution you expressed your disappointment about the reaction of Latin American countries (more precisely, governments) in connection with the sanctions recently approved against Venezuelan bureaucrats by your government. You consider this as “a lack of defense of democracy” on the part of the Latin American political leadership and define this reaction as “an exercise of solidarity based on rhetoric”.  You add that Latin American leaders are “demonizing” the U.S. as if your country were the source of Venezuela’s problems. You express disappointment that the defense of the sanctions was not forthcoming and tried to explain in your speech the nature of these sanctions. You explained that the sanctions were taken only when the U.S. had lost all hopes of a dialogue with the Maduro government.
I find it rather naïve that you should take the posture of these leaders as representing the true posture of Latin American citizens. This is not the case. You should carefully distinguish between the expressions of those leaders and what the peoples of the region really believe. I can assure you that the overwhelming majority of the Venezuelan welcome and support the sanctions, as they represent a prophylactic action that should have been taken by the Venezuelan authorities themselves. This will never be the case because the Venezuelan authorities are an integral part of the mafia which controls the country. One sign that the rhetoric of these leaders does not convey the true feelings of the Latin American is that, today, many former presidents of Latin American countries have come forward to criticize the repressive regime of Venezuela. Once these presidents abandon their official positions they become able to speak freely.
Why do they current hemispheric leaders take this posture? There are two main reasons: (1), most of them, from Ecuador to Argentina, from Cuba to Jamaica have been beneficiaries of the prodigality of the Venezuelan regime, which has given handouts in cash and oil to those leaders in an amount that can be estimated at some $50-60 billion. This is money that belonged to the Venezuelan people but has been utilized by the Venezuelan regime to buy loyalties and following in the region; and, (2), there exists a deep seated resentment of Latin American politicians against the United States, for real or imaginary past slights and this resentment, combined with ideology, smothers any possibility that they could side with the U.S. in a political issue involving one of their colleagues.
The U.S. should be prepared to take the battle for Latin America past the cancerous diplomatic epidermis of the OAS, UNASUR or CELAC, into the realm of public opinion. In particular, it should be prepared to bring to Panama an account of the crimes Venezuelan bureaucrats and friends of the regime have committed both in the U.S. and all over the world. Venezuelan President Maduro is planning to bring to Panama a list of 10 million signatories against President Obama’s sanctions. This will be a fictitious list but it will do the P.R. job they need, unless the U.S. can expose them further, as the bunch of crooks they are.
Mrs. Jacobson: bring the truth with you to Panama and the defenders of democracy in the hemisphere will side with you. Do not take a defensive attitude against the criminals. The U.S. has to live up to its creed on human rights, on liberty, democracy and justice for all. Millions of Latin Americans expect the U.S. to do this.

Gustavo, this great letter should be publish in El Nacional and the websites of venezuelan readers. All of the other South American countries (maybe with the unique exception of Paraguay) found in the Chavez regime (worst in the entire Venezuela's history) a populist that paid a lot of money to boost their economies.

Today, Venezuela is full of fracases in all the aspects: infrastructure maintenance, industrial complexes, sanitary services, personal security and salary's purchase power. The worst inflation rate in the continent and a 500-600 crimes any monthly sum.

You can say that Venezuela is not only as Cuba. Is, in every aspect, worst than this communist island.

The signatures, if true they are, were obtained through blackmail, extortion or bribery. So their origin is false. The majority of Venezuelans know that the sanctions are against corrupt individuals and not the Venezuelan people. Mrs. Jacobson, it is said that the best defense is a good offense. You should hit the ground running and come out swinging with all you have in order to put the criminal regime of Venezuela in its place. In other words, don't hold your punches, give them hell.

Take it away Willie

Unfortunately the Obama administration is ideologically leftist and agrees with the imaginary faults of the US just as all the thugs in charge in Havana, caracas, lima, Quito and Buenos Aires do.
Good luck expecting support from him.

As always, you got such a beautiful mind. Bravo. God give you a healthy, lengthy life Gustavo.

This bunch of presidents could sell their souls to the devil just to get some oil with discount or irrational payment terms.