PETROSAUDI AND PDVSA: ANOTHER GREAT FRAUD

In  May 2010 the sinking of the offshore drilling barge Aban Pearl, contracted in Singapore by fraudulent means by PDVSA with a ghost company called PetroMarine, see:  http://lasarmasdecoronel.blogspot.com/2010/07/mi-entrevista-sobre-el-aban-pearl-en.html and http://lasarmasdecoronel.blogspot.com/2012/07/revisiting-aban-pearl-now-with-more.html forced PDVSA to look for a replacement. In November of the same year, then Minister of Energy and Petroleum and President of Petroleos de Venezuela, Rafael Ramirez, announced that the company was planning to create a joint venture with a company called Petrosaudí to acquire two offshore drilling barges, The Songa Saturn and the Saturn Discoverer, to replace the Aban Pearl. He added that PDVSA would invest some $2.5 billion in this new company. What Ramirez did not say was that these old two barges had already been acquired by Petrosaudi for about $400 million.
As soon as Ramirez made this announcement I smelled a rat. Coming soon after the Aban Pearl fraud this sounded to me like more of the same. Sure enough, when I researched Petrosaudi International, I immediately saw that this was a fly by night outfit, with a name that falsely suggested a formal affiliation with the Kingdom of Saudi Arabia. In reality this company had been created a few years back by a small group of financial speculators without any significant oil industry experience. The Group was led by a person, Tarek Obaid, who claimed to be part of the Saudi royal family, but was only an international playboy, more interested in Formula One, where he was associated with Renault, than with the oil industry. I reported all of this in my blog back then, see:  http://lasarmasdecoronel.blogspot.com/2010/09/pdvsa-y-las-gabarras-de-perforacion.html and kept reporting it later on. I kept asking questions such as this:
·       What kind of company WAS Petro Saudi?
·       What were its credentials in the oil industry?
·       What were the terms of the contract between PDVSA and Petrosaudi for the use of these barges?
·       What were the technical conditions of the drilling barges?
·       Could this be another fraud, such as the one related to the rental of the Aban Pearl?
I verified that the two barges were old and in poor condition. The Discoverer had been built in 1977 and had gone through several hands. When it worked for PDVSA it could only complete one well in two years, until the workers in the barge demanded from PDVSA that it be decommissioned, since it was operating without the proper international certifications of safety of the American Bureau of Shipping. Although the Saturn was in similarly poor conditions it had been rented by PDVSA at the rate of some $485000 per day, a grossly overblown rate, for seven years, the same type of fraud that had been done with the Aban Pearl.
Of course, in Venezuela nobody listened to me.  Now, years later, a superb investigation being done by the Sarawak Report, see: http://www.sarawakreport.org/2017/01/petrosaudis-1mdb-financed-venezuelan-adventure-and-the-money-it-didnt-make/ edited by Ms. Clare Rewcastle Brown, throws considerable light on this deal between Petrosaudi International and PDVSA. The magnificent investigation by the Sarawak Report confirms my worst misgivings about this deal. The report is part of a series in the comprehensive investigation being conducted by this publication about the huge Malaysian fraud related to the 1MDB, the government fund of this country, which has proven to be a nest of vipers, see also:  http://www.wsj.com/specialcoverage/malaysia-controversy .
The fascinating report by the Sarawak report should be read in its entirety but I would like to point out some of its contents related to Venezuela, since they illustrate the manner in which PDVSA has been managed by the gang of crooks led by Rafael Ramirez.
1    The deal between Petrosaudi and PDVSA was “facilitated” by Venezuelan in-between, the Pantin brothers, Gerardo and Eduardo, who had ready access to three persons within PDVSA with authority to close the deal: Jose Luis Parada, Eulogio del Pino and Rafael Ramirez. The brothers told Petrosaudi that they could get the deal through, provided only those persons mentioned above had access to the contract. The Sarawak report includes this email from the “fixers”

The Sarawak Report obtained copies of the PDVSA-Petrosaudi contracts, which “confirmed the extortionate terms Petrosaudi extracted from PDVSA”. In addition to the inflated rental rate there was a mobilization fee obtained by Petrosaudi of $56 million, when – in my opinion – this fee should have been closer to $15 million.
The report adds that this deal was possible due to the work of Gerardo and Eduardo Pantin. Petrosaudi would write them:
‘ We need a strategy for how we will get paid …. We expect this from you as our partners on the ground and the ones that understand PDVSA best and have all the key relationships”. However, payments from PDVSA were slow in coming and Petrosaudi would write to the Pantin brothers:

The Pantin brothers, says the report, obtained immediate benefits from the deal. In addition to the share of the Mobilization fee, says the report, the company of the Pantin brothers, CPVEN, was subcontracted to manage all the drilling work for the PetroSaudi adventurers (who had no clue how to run an oil operation). They were also hired as agents.

For their role as agents it was agreed the Pantins would receive 2% of the day operating rate from Discoverer and 3% of the day operating rate from Saturn.
The payment was eventually settled at 3%
The report continued describing the deal:
There was also a deal to split the vast mobilization fees that the Pantins extracted as upfront payments from the Venezuelans at the start of each operation.  This fee should have been no more than $15 million to cover costs of the setup, however the Pantins organized $56 million to be paid in the case of Saturn, much of which was distributed back to local officials and contacts via banks in Panama, according to inside information from PetroSaudi.
The Pantin brothers themselves requested additional payments of $7 and $8 million to be paid through anonymous off-shore companies: 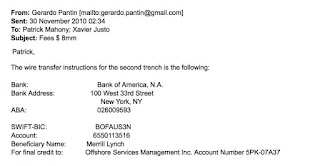 All aspects of the deal were agreed with a few PDVSA managers, including Del Pino, Fadi Kabboul and, of course, Rafael Ramirez, who had to approve all payments.
Patrick Mahony
Para 14/01/2011 01:47pm

Asunto Follow Up to NYC Meeting
Dear Eulogio and Fadi,
Happy New Year to you both. I hope you managed to have a good break.
I wanted to follow up on our meetings of NYC and specifically what is happening with the operations of the Discoverer and the Saturn. As we agreed in NYC, it was very important for us to finish 2010 with zero receivables outstanding from PDVSA so that we could avoid any problems with our bondholders. Unfortunately however this did not happen and we finished the year with almost $70m outstanding from PDVSA. This means we will have to report this to our bondholders when we report our full year results at the end of this month and this means we will put them in a position where they can take action against this business and this could put the entire operation at risk. When we sat in NYC we discussed the importance of keeping the bondholders happy as this would not only allow us to go back to the debt market when we want to acquire more assets but also these are very large financial institutions that are important for both of us in the international markets. Defaulting on these loans is something that would look very bad
for both of us and certainly make getting financing for any offshore equipment in Venezuela almost impossible – something neither of us would want if we are planning on growing this business. Furthermore, giving the bondholders reason to take action by not paying could have us end up in another Neptune situation, which we both should work very hard to avoid. We came together to solve the Neptune problem so we would be very foolish to create another Neptune problem only a year later when we can easily avoid it. The lack of payment is also causing fears with our employees and could disrupt the operations further that way. Together with the fact that the Discoverer contract is coming to an end, we have some nervous personnel on the vessels and this could really hurt what are, by your own admission, very successful operations today. You mentioned in NYC that you could write us something to reduce the concerns of our employees and show them that the Discoverer contract will be extended. Is this still something you plan on
doing? This would help greatly as we currently run the risk of losing many
good people if they feel a) the Discoverer contract will not be extended
and b) PDVSA is not paying us. I know you dismissed these matters as not being very important and only being small numbers in terms of what the relationship between PDVSA and PetroSaudi may become but this is unfortunately not the point. Every business we invest in needs to operate independently and be profitable independently. This means that our offshore services business needs to be an independent business and we cannot mix it with what we do in upstream or CITGO with you. Also the numbers may be small in the grand scheme of the things we are discussing but in proportion to the size of this particular business, the outstanding receivables are very large (today $76m approximately) and it troubles us greatly that PDVSA, as such a large national oil company, is not able to make such small payments. I would like to reiterate our commitment to work with you and PDVSA and our desire to expand our business relationship far beyond these two drillships, however the situation on our offshore business with you has come to a point where we may lose control of this operation due to PDVSA’s lack of payment and this would greatly undermine all of the potential future business we could do together. As you yourself said in NYC, operationally you are very happy with us so the only problem is really a lack of payment. We will be in Caracas next week and would be happy to sit down and discuss the above with you, please let us know if any times are convenient for you.
I urge you to please attend to these matters so that we can focus on the more interesting and larger business propositions we discussed. Let’s not let our relationship or these operations go to waste over such small amounts.
I look forward to hearing from you.
In this lengthy memo Petrosaudi talks about PDVSA being very satisfied with the operations. In fact, the operation was a disaster.


Another email, see below, shows that PDVSA had started to fail in their payments

As the reader can realize this deal was another big fraud. The names involved in this deal should be investigated. Who will investigate? Where did the money involved in this deal go?  Who is responsible?
These are all questions that should be answered by honest authorities. Where are they?
Where are the Venezuelan leaders who will clean up this fetid mess?
We will return to this topic soon.
Publicado por Gustavo Coronel en 16:32