A note on the Carter Center article 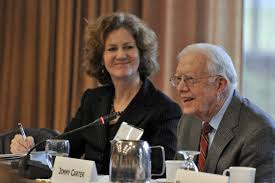 Dr. Jennifer McCoy(in photo with President Jimmy Carter),  at the Carter Center, tells me that the Carter Center as such has "nothing to do with the signing event of the author George Cacciarello-Maher, slated for this coming 9th of July".  Dr. MCoy tells me that they are part of the national system of libraries and, as such, have no saying in the selection of books to be object of this distinction.
I hear her explanation and gladly transmit it to my readers.  In fact, I now realize that the Carter Library and the Carter Center are two different entities. In this sense, I accept Dr. McCoy's explanation. However, I feel that President Carter cannot be so naive  as to lend its name to authors of the murky political reputation of Mr. Cacciarello-Maher, without having a saying in the matter.  I told Dr. McCoy that I would be very careful when lending and my name to any cause, precisely in order to avoid the type of confusion that now exists in this case.
Publicado por Gustavo Coronel en 14:02