Jimmy Carter: the company he keeps 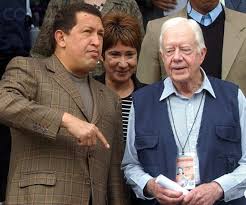 The 9th of this month, the Carter Center will host George Ciccariello-Maher’s book: “We created Chavez”. During this event the author will read from the book and will sign copies for those who buy them. See advertisement in: http://www.acappellabooks.com/event/george-ciccariello-maher-book-signing


Who is this gentleman? “He studied in Cambridge, where he worked with various anti-capitalist collectives…His interests could be broadly grouped under the heading of “radical theory,” but also include colonialism, world-systems theory, Black thought, hip-hop culture and rap music, Latin American politics and philosophy, and non-orthodox Marxism….George spent a year living in Caracas, Venezuela… working closely with movements on the revolutionary wing of the Bolivarian Revolution”..


In hosting Mr. Ciccariello-Maher the Carter Center clearly drops all pretenses of being objective about Venezuela and embraces, enthusiastically, the cause of the most corrupt, inept and undemocratic regime since Cipriano Castro (Venezuelan dictator,1899-1908)  came down from the mountains to convert Venezuela in a circus.


Ciccariello-Maher has defined the Chavez’s regime as follows:


(1) the source of power is not a law previously discussed and enacted by parliament, but the direct initiative of the people from below, in their local areas—direct “seizure,” to use a current expression;

(2) the replacement of the police and the army, which are institutions divorced from the people and set against the people, by the direct arming of the whole people; order in the state under such a power is maintained by the armed workers and peasants themselves, by the armed people themselves;

(3) officialdom, the bureaucracy, are either similarly replaced by the direct rule of the people themselves or at least placed under special control; they not only become elected officials, but are also subject to recall at the people’s first demand; they are reduced to the position of simple agents; from a privileged group holding “jobs” remunerated on a high, bourgeois scale, they become workers of a special “arm of the service,” whose remuneration does not exceed the ordinary pay of a competent worker.


… This concept can clearly be applied to Venezuela”.


“Poverty has been reduced significantly, and extreme poverty almost stamped out. Illiteracy has been eliminated and education is freely accessible, through the university level, to even the poorest Venezuelans. Health care is free and universal. Despite catastrophic language by the Venezuelan opposition and foreign press, the economy is strong, and has weathered the global economic crisis better than most (notably, the United States)”.


Jimmy Carter should know well that these are mostly lies, either as product of a hired gun or of the mind of an ideological fanatic.  However, his Center is receiving him with open arms.


Upon Hugo Chavez’s death Jimmy Carter made a carefully worded statement in which he said, among other things: “We came to know a man who expressed a vision to bring profound changes to his country to benefit especially those people who had felt neglected …, we have never doubted Hugo Chávez's commitment to improving the lives of millions of his fellow countrymen…. “.
For Venezuelan democrats such a statement from a former U.S. president represented a major disappointment. “Perhaps he is ill advised” some might have said. The invitation for George Cacciarello-Maher proves such sugary statements were not a onetime error. Whether this posture represents Jimmy Carter’s true beliefs or is adopted for a fee, I find it highly censurable.
Publicado por Gustavo Coronel en 10:14