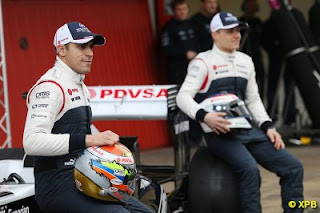 
Today, Pastor Maldonado, the Formula One race driver, arrived in the 10th position in Hungary, his best showing so far this year. Three years ago Petroleos de Venezuela, PDVSA, the Venezuelan state-owned oil company agreed to pay Williams a sum of about $50 million per year for four years, so that race driver Pastor Maldonado, a friend of the president of the company, could race one of their cars. This deal is corrupt due to several reasons: (1) Formula One is an elitist sport, not practiced in the country; (2), Petroleos de Venezuela signed this contract without any transparency. (3), the amount of money involved is very significant, especially for a country that has extreme economic problems and very high debt; (4), While this patronage is extended to Maldonado, Venezuelan universities and hospitals lack the most essential equipment and materials.


Maldonado has proven to be an unruly driver, one of the most penalized Formula One pilots during the last two years. Since his car carries the Venezuelan flag, his performance as a driver and as a sportsman has become a source of discredit to the country. Last year he brought a race car to Venezuela to give an exhibition. Awed Venezuelans, who had never seen a Formula One race car in real life, also saw Maldonado losing control of the car and crashing, all by himself.


Not only the deal with Williams is highly unethical but, from a sports perspective, results have been  very poor. Maldonado has found a consistent niche around the 15th position, race after race, another source of embarrassment for the country. He always has an excuse and promises that next time he will do better. In nine races this year he had not earned one single point, until today, when h arrived 10th and earned one.


I publicly accuse the president of the oil company, Rafael Ramirez and the Formula One driver, Pastor Maldonado of corruption and demand that this waste of Venezuelan money ends immediately.
DATA ON

Maldonado replaces Kimi Raikkonen, who will drive for Ferrari next season, and has won his seat largely because the team need an injection of funds.
A planned investment deal with the US-Middle Eastern consortium Quantum has so far failed to materialise.

That meant Lotus could not sign their preferred driver, German Nico Hulkenberg, who has only limited personal backing.

Maldonado comes with significant funds from the Venezuelan state oil company PDVSA, which has paid £30m a year for him to drive at Williams since 2011.

"It is a fantastic opportunity for me," said Maldonado.

"It's no secret that I have wanted a change of scene and the Lotus F1 team offered the very best opportunity for me to be competitive next season.

"The regulations and cars will change significantly so it is a very good time for a fresh start."
Lotus team principal Eric Boullier said: "It is clear that Pastor has pace and potential, demonstrated by his 2010 GP2 Series title success and strong races throughout his career at Williams.


"We are convinced we will be able to provide the correct environment to enable him to flourish regularly."

Lotus, who finished fourth in the constructors' championship, have made no secret of the fact they have had cashflow problems this season - Raikkonen quit the team two races before the end of the season because he had not been paid all year.

The team owe him 17.15m euros (£14.5m) because of a salary of eight million euros and a bonus scheme worth 50,000 euros a point.
Hulkenberg will now drive for Force India, where sources say his deal has been done.

He is expected to be joined by Mexican former McLaren driver Sergio Perez, who is on the verge of concluding his own deal with Force India.


Hulkenberg's Sauber seat will be taken by German Adrian Sutil, whose contract is also said by sources to be secured but has not yet been announced.

The identity of the Swiss team's second driver is not yet known, but they are likely to stick with Mexican Esteban Gutierrez for a second season.

This year's other Force India driver, Scot Paul Di Resta, will lose his place in F1 and is hoping to land a seat in US-based IndyCar racing.

Lotus is a major step up for 28-year-old Maldonado, who won one race for Williams in Spain in 2012 but whose driving has often been erratic.

He has made it clear that he felt Williams had held him back this season, while the team were also happy to part company. Williams have signed ex-Ferrari driver Felipe Massa to join promising Finn Valtteri Bottas.