Our reading: a major victory for the democratic opposition 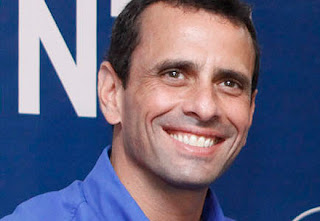 After the dust settles, he will emerge as the clear winner, even if the recount does not reverse the announced results. What a showing!
**** The main result: Hugo Chavez is really dead
****  Even if results are not reversed after 100 percent r-couning of the votes,  this is the last hurrah for the "revolution"


The government controlled National Electoral Council, supported by the Armed Force, announced today, in the very early morning, that after 99,1 % of the votes have been counted, the government candidate, Nicolás Maduro, has won for some 270,000 votes, against Henrique Capriles. Maduro obtained 7.53 million votes against 7.27 million votes for the opposition. This result is so close that the opposition candidate has not recognized it and is demanding a complete recount of the votes.


This extremely close result can clearly be read as a major victory for the Venezuelan democratic opposition. Why?  Because the built-in bias in favor of the regime in the Venezuelan electoral process is so great that, for all practical purposes, the regime starts any presidential election in the country with 2 to 3 automatic points in their favor. The reasons are several: (a), there are about 2.3 million public employees in the country, which, together with their families, represent a population of some 6-7 million people, about 25 percent of the population. Oil income has been used to a large degree to keep these votes firmly in the pockets of the regime, subject to a patron-client relationship that provides them with a job in exchange for political loyalty; (b), a National Electoral Council and structure clearly controlled by the government, that allows the government all kinds of violations of the electoral law without sanctions of any kind; (c), a lopsided advantage in the time allotted for political propaganda in the regime-controlled media. (d), a financing of the official campaign with national money, which includes handouts such as cars for the military and Chinese-made household equipment, from TV sets to ice-boxes and washing machines, for the voters; (e), the organized support of the Armed Force and of government companies such as Petroleos de Venezuela to supply transport for government followers to vote and, even, to twist the arm of those who are reluctant to do so.  The weight of the regime is so great in these electoral events that a in for the opposition has been converted in an impossible task.


This is why the close results of yesterday have to be considered as a major victory for the opposition. The results will be much closer once all votes are counted, something which has never done before,  including the estimated 150,000 votes of Venezuelans abroad, which in previous elections have not been taken  into consideration due to the larger margins involved. Results abroad are consistently 8 to 2 in favor of the opposition.


What is the meaning of these results? The main one, that Hugo Chavez is really dead. The Chavez sentimental factor did not play such a decisive role as previously thought. Only a couple of months after his death his political punch has decreased to almost nil, as over one million “chavistas” changed sides and voted for the opposition. Two, that electoral abstention, at over 21 percent, keeps hurting the opposition, which relies entirely on voluntary voters, while the regime relies on an organized system of mass transport and arm-twisting to guarantee the participation of their followers. And, Three, that the so-called “socialist revolution” has lost much of its momentum and has started to limp along.  Half of the nation is now firmly against it, including a large portion of those who endorsed it during Chavez’s tenure. This suggests that the ideological content of the regime is shallow, that its real source of support had been the charisma of Hugo Chavez, now dead. Maduro revealed himself as a very colorless and ignorant politician and this proved to be too much to swallow, even for many supporters of the regime.


Now, what? Maduro, a very weak candidate lacking the intellectual and political equipment to govern a country in ruins will face an increasingly difficult situation. He has lost a considerable portion of its domestic political support and will be, more than ever, a hostage of the Cuban regime. Within chavismo,  now without Chavez, other forces will now start to exert pressures on him, namely the military and Maduro’s main competitor, Diosdado Cabello. The opposition has now  been given a mandate to conduct a vigorous and permanent campaign against the government. Financial conditions in the country have become extremely poor. All in all Maduro will be facing, almost inevitably, a major political and economic crisis in the months ahead.

More like 10 automatic points in favor of the Government....