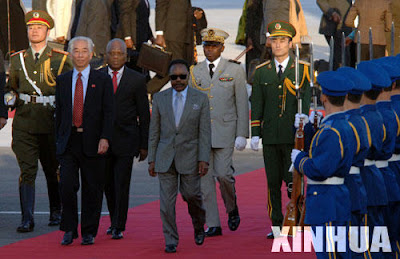 The guy was pretty small, in every way.


After 42 years in power Omar Bongo, the ruler of Gabon died in a hospital in.... Barceelona, Spain. In 2003, the Gabonese constitution was changed to eliminate any restrictions on the number of terms a president can serve. Bongo's critics accused him of intending to rule for life. Does this sound familiar to Venezuelans??
According to official results, Bongo won the Nov. 27 election with a large majority of 79.2 percent in 2005. He was sworn in for another seven-year term on Jan. 19, 2006. (I wonder who was in charge of the elections, probably Jorge Rodriguez).


Yes.... Bongo was Gabon's Chavez or, to be exact, Chavez is Venezuela's Bongo. Bongo was one of the most corrupt political leaders in Africa, not an easy accomplishment.


It is, therefore, not surprising that Hugo Chavez is very sad about the death of Bongo. Mugabe, from Zimbabwe, however, is happy because that allows him to become the new record holder, if he can stay alive. Castro rejoices because he still owns the Guiness record for third world dictators and Mugabe looks pretty weak nowadays. What a bunch of despicable monsters!


Chavez is not going to make it in that league. He is months or, at best, a couple of years away from having to say goodbye.
Publicado por Gustavo Coronel en 16:31

Meanwhile the French Government is expressing deep sorrow for the passing. Guess they will have to watch their oil concessions. Wonder what they will say when "el amo de Sabaneta" goes belly up.