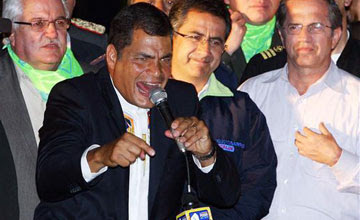 Either I get paid or I drill in the protected areas!!!

http://www.petroleumworld.com/ publishes today a story by France Press about Ecuadorian President Rafael Correa asking for billions of dollars from internacional organizations or countries not to drill in protected areas of his country.
Here is the story, in full:
Ecuador wants billions to not drill in biosphere reserve
QUITO
Petroleumworld.com, June 01, 2009
President Rafael Correa on Saturday said that he wants the world to pay Ecuador some 5.2 billion dollars in exchange for not drilling for oil in the Yasuni National Park, a UNESCO world biosphere reserve.
Until now, the government had asked for 350 million dollars a year for not drilling in Yasuni, where there are some 920,000 barrels of untapped crude.
The figure is half of the profits expected from extracting the oil.
However Correa on Saturday changed gears, saying that he wants Ecuador to receive 5.2 billion dollars instead -- taking into consideration the pollution that would be avoided.
According to Correa, the international community should compensate Ecuador for "prevented contamination," maintaining biodiversity and fighting poverty in the area.
"Calculating the tonnes of carbon that we will avoid sending into the atmosphere, because we are not going to drill for oil in Yasuni, we consider that ... we could or should receive close to 5.195 billion dollars," he said.
The oil deposits, located in the Yasuni Biosphere Reserve and National Park, have presented a dilemma for the Correa administration, which on one hand advocates strong ecological policies, but on the other depends on revenue from oil sales and is a member of the Organization of Petroleum Exporting Countries (OPEC).
Yasuni is located 300 kilometers (186 miles) southeast of Quito and is 950,000 hectares (2.3 million acres) large.
Ecuador in 2008 produced on average 506,000 barrels a day.
Story from AFP AFP 05/31/2009 00:29
***************************
This story is almost unbelievable in that it presents the president of a nation openly trying to extort money from other countries in order not to allow an environmental crime to be commiteed!!!
This man claims that the oil production, if allowed, will generate tons of contaminants and is saying that unless his governmen obtains billions of dollars from the rest of the planet, he could well give the activity the "green" light (excuse the pun). This is what I understand he is saying and I would love to hear an alternative, more innocent, explanation.
Correa has the duty to do well by his country and his people. It is not that he can say: "either we get paid or we won't do what we should do". It is almost as saying: "Pay the ransom or I'll kill the baby".
Publicado por Gustavo Coronel en 8:07