Hannah to Correa to Donziger: the double play that failed 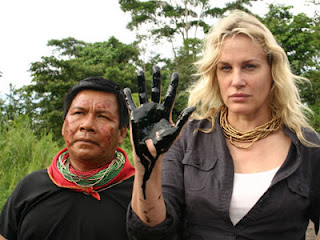 Baseball fans are familiar with Tinkers to Evers to Chance, the famous double play machine of the Chicago Cubs in the early 1900’s. In Ecuador, a legal action started against ChevronTexaco in 1993 looked like a sure political and economic double killing.  A dashing, Harvard graduate young attorney (Steve Donziger), a beautiful and idealistic actress (Daryl Hannah) and the charismatic president of Ecuador (Rafael Correa), joined forces, ostensibly to protect a group of defenseless natives from a greedy and polluting oil company (ChevronTexaco).  At first, everything went like clockwork. Environmentalists, leftist groups, artists, lovers of the underdog, flocked to the side of the plaintiffs. When the judge rendered his decision, sure enough, ChevronTexaco was condemned to pay the staggering amount of $19 billion. During the long trial U.S. legal firms, Public Relations outfits, financial entities and technical advisers had enthusiastically jumped on the bandwagon, hoping to share the payout of a lifetime.


Daryl Hannah had visited the area in 2007 speaking like a true expert in these matters: “I was invited… to witness the devastation for myself.  [I visited] at a pivotal time when the President of Ecuador was going to be ratifying the proposal to save Yasuni [an area in the Ecuador Amazonia] , so there was a dual purpose…. we actually went to a clinic and we met people who’ve been affected health wise, as well as people in the communities, we went into the Cofan community and talked to people. We went to see oil pits that are obviously still open and still being used”.   After winning much sympathy for the plaintiffs she handed the ball to Correa,  who said publicly that if the judge decided in favor of ChevronTexaco he would be treated as a traitor. He also labeled as traitors the Ecuadorian authorities that had given Texaco a full release of their obligations when they departed the country in the 1990’s. Having reinforced the case of the plaintiffs Correa gave the ball to Donziger and…. he dropped it.
What he did was no less than to hire technical staff to write the court "expert’s" report to his specifications, to employ U.S. and Ecuadorian specialists to state falsely that ChevronTexaco had contaminated the environment, to conspire with government officers to bribe the judge and to use Ecuadorian lawyers to “help” the judge write the sentence against the oil company.  When these illegal acts started to be exposed by ChevronTexaco, the technical and legal staff hired by Donziger started to recant,  U.S. public relations and legal  firms abandoned him and the financial support he had been receiving went dry. Today he is the accused in a New York Federal Court, no longer the accuser . His lawyers, Keker and van Nest LLP,   have received permission from the New York judge to drop out of the case, claiming Donziger and his Ecuadorian associates had used “dirty tricks” to win the original case against ChevronTexaco (http://www.law360.com/articles/444455/donziger-loses-bid-to-delay-19b-chevron-case ).


Hannah to Correa to Donziger attempted what appeared to be an esay double play but Donziger dropped the ball.
Publicado por Gustavo Coronel en 5:52

Stay on this one Gustavo.

You need to gnaw on this one like a dog on a bone.