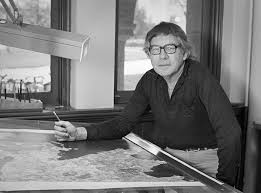 T.H., Jay,Van Andel, 1923-2010
In 1955 I arrived in Maracaibo, Venezuela, as a newly graduate geologist from the University of Tulsa. Shell, the company that had given me a scholarship, had a job waiting for me, as a field geologist. In the Maracaibo office of Shell, located in the beautiful building called “Las Laras” (the local name for the Venezuelan national tree, the Araguaney, Tabebuia chrysanta), I found the office inhabited by a group of extraordinary geologists, among others : O. Renz, K. Habicht, H. Bolli, R. Beck, H. Reading and Tjeerd H. Van Andel. These men were already superb geologists but they would become truly famous in time. I was awed by so much talent. I have written about most of these men but not about Van Andel.


Van Andel was barely 30 at the time. Still, I saw him as a senior person since I was only 20. I remember him as rather distant, with a dry sense of humor, not given to make small talk to the lesser mortals such as myself. He was a sedimentologist and had been paying much attention to the recent sediments of the Orinoco delta. In fact, he had been involved in studies of recent sediments for some time, at the Wageningen Geological Institute, Holland, and later, in Venezuela. In 1952-1953 he had participated in an expedition to the Orinoco delta and the Gulf of Paria regions to collect sample of recent sediments, in order to study their provenance, the changes experienced during transport and the influence of diagenesis in their properties. A result of this expedition was the publication, in 1954, of a magnificent study on “The Recent Sediments of the Gulf of Paria. Report of the Orinoco Shelf Expedition”, authored by Van Andel and H. Postma, Vol. 1). I have a copy of this wonderful piece of work that covers the hydrography, sedimentary petrography, fauna and sedimentation patterns and facies of those deposits.


From Shell in Maracaibo Van Andel went on to the U.S. in 1957, where he joined the Scripps Institute of Oceanography and 10 years later moved to Oregon State University. During this period he became a pioneer in studies of the ocean floor. In 1976 he joined the faculty at Stanford where his work flourished even more, including dives to the ocean floor offshore Ecuador, where he identified deep sea hot springs and a surprising array of new fauna.  He became co-director of Stanford's Archaeological and Environmental Survey of the Southern Argolid in Greece in 1978.  He moved to Cambridge in 1987. In 2006 or so I bought a book published in 2005: “Odysseus unbound: the search for Homer’s Ithaca” and saw that Van Andel, already at Cambridge, had collaborated in this beautiful study. I took this opportunity to get in touch with him, after so many years, and exchanged several cordial messages with him. 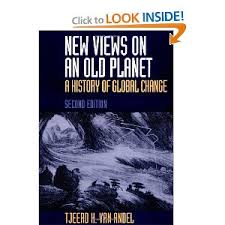 A few weeks ago I bought and read his extraordinary book: “New Views on an Old Planet: A history of global change”, a poetic book about the story of our planet, designed for non-geologists. This book covered much ground: rocks, climate, drifting continents, changing oceans, and a biography of the earth written in a wonderful prose, spiced with humor. I was   so delighted with this work that I started to look for Van Andel's email address to let him know. Sadly, I found out that Jay, as he was called by his numerous friends, had passed away in Cambridge in 2010, at 87.


Jay Van Andel was a man of multiple talents. I am fortunate to have met him when he was in the early stage of his illustrious career. Indeed I was very lucky to be surrounded by giants of science when I was a young geologist in Maracaibo. I did not, could not, follow in their footsteps but I am sure I am a better person today for having shared the air they breathed
Publicado por Gustavo Coronel en 6:20

He lived a long,productive live, which your eulogy captures very well.