Acquisition of EMBRAER airplanes by CONVIASA should be investigated


This is a revised, shorter version in English of my post in Spanish, below in this blog 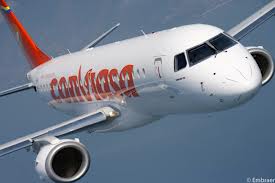 The order for 20 Embraer 190 airplanes was placed last year by Venezuelan national airlines CONVIASA.  It was reported at the time in the local Venezuelan press (my translation): “EFE news agency, Caracas, October 17. CONVIASA will expand its international routes this year, from four to ten, by using three of the twenty airplanes already on order from Brazil. The announcement was made by the president of the airlines, General Cesar Martinez. He said that the cost of the acquisition for the three first airplanes was $270 million”.  At the time I commented on this announcement in a Venezuelan website, www.analitica.com, in October 20, 2012, as follows: “ A report, http://www.ainonline.com/aviation-news/aviation-international-news/2012-08-02/farnborough-international-report-2012 tells us that Brazilian company Embraer just sold Hebei Airlines, from China, five Embraer 190 airplanes for $223 million, this is, about $44,6 million for each airplane”. I added that, according to the president of CONVIASA, the cost to Venezuela of the same equipment was some $90 million per airplane, more than double the cost to the Chinese. I also said that this significant overpricing should be investigated. An overprice of some $40 million per airplane amounts to $800 million for  the whole order,  an enormous amount of money that should be accounted for.


CONVIASA was created by the government in 2004, to replace VIASA, the former national airlines that went into liquidation in 1997. The airlines is currently banned from flying to Europe for failing to meet European security requirements.  CONVIASA has had seven serious accidents in 8 years, see: http://www.eluniversal.com/economia/120814/conviasa-acumula-7-accidentes-en-8-anos-de-funcionamiento , including one in 2010 with loss of 17 lives.


Poor performance and lack of transparency in the acquisition of airplanes are a lethal combination for any airlines.