Some 30 years ago I bought, at random, the Durdane Trilogy by Jack Vance (The Anome, The Brave Free Men and The Asutra). I had never heard of Vance but this work opened the doors for me of a long string of marvelous worlds and unforgettable characters. Above all, it allowed me to enjoy a  prose so poetic the likes of which I had never seen before, at least in this field of fantasy fiction. The Durdane trilogy moved me, the saga of a small group of ordinary people that finds the way to save their planet from an alien invasion. It carries the same message of “The Lord of the Rings” but in a much more compact manner, in less arcane prose, with characters who are more like us. I still re-read this trilogy once a year because it reaffirms my faith in the power of perseverance. I count his main character, Gastel Etzwane, as one of my favorite heroes.


After this find I started acquiring other works by Vance: “The Cadwal Chronicles”, “The Dying Earth”, “Big Planet”, “To Live Forever”, “Alastor”…. Vance wrote about 60 novels of this type, most of which are out of print, although there is a set of his complete works available for $2,500 (!).Many of his novels can be found through the secondary markets, www.amazon.com .


What is superb about Vance? His prose. It is tasty, inimitable. Read his introduction to “Throy”, the third book of “The Cadwal Trilogy”:  “Halfway along the Perseid Arm, near the edge of the Gaean Reach, a capricious swirl of galactic gravitation has caught up ten thousand stars and sent them streaming off at a veer, with a curl and a flourish at the tip. This strand of stars is Mircea’s Wisp”.


Everything about his work is elegant. His wish was to be an anthropologist in distant worlds. His novels deal with conflicts and solutions in far-away stars where magic and technology co-exist in harmony, always with nostalgic references about mother earth. In “Big Planet” he describes a village where lords and servants exchange roles, each on having moments of power and moments of humble work. In another planet his main character travels to a city where the hotel has five entrances. The traveler can choose one, depending on his/her social status but the hotel is the same one, all doors converging to the same registration. In “The Dying Earth” Vance gives us Cugel, a memorable and creative rogue who seems taken out of the Spanish picaresque literature, such as Lazarillo de Tormes,  or a Till Eulenspiegel type of character. The constant theme of his work is the triumph of perseverance. His influence on the great science fiction writers has been great. George Martin, the author of “Game of Thrones” had him as one of his idols.


Jack Vance has just died, at 96. His devout readers, such as I, had the hope that he would live forever. However, if we are to believe Ray Bradbury, who said that we die when we stop doing what we have doing, Vance had died already a few years ago. He was essentially blind and did not write. For all practical purposes he was not Jack Vance but his sweet memory, as he sat against the dying sun, to feel the marine breeze, in the terrace of his California, Tiburon home, surrounded by the memory of his characters. 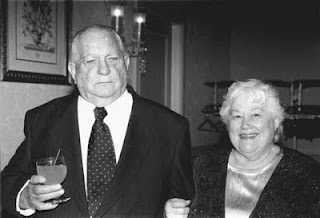 Jack and Norma Vance, 1997
But what a memory, what a presence he leaves behind! His work is ambrosia for the intellect. The elegance of his   prose has been described as that of Fabergé eggs, his sense of humor, his acute observations about human nature, will delight us and those who come after us.